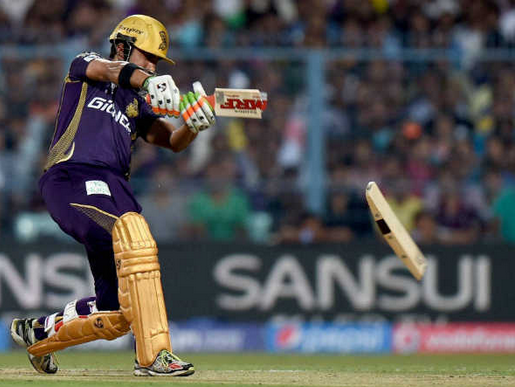 Set a target of 169, KKR started the run chase with skipper Gambhir and Robin Uthappa. After Lasith Malinga had bowled the opening over, Gambhir took strike to face the second from Vinay. Vinay, who was with KKR last season but released and later bought by MI at this year’s auction, ran in to deliver his first ball of the tournament.Â

Gambhir, the batsman, was intent on being aggressive right from the start and charged out of his crease. As the ball met the bat, the willow broke into two pieces. Gambhir was left with holding the bat handle with little more piece of wood.

The left-hander soon came down the pitch and had a conversation with his partner Uthappa. As soon as this happened on the field, Twitter was abuzz. Yuvraj too joined in to make fun.

The most expensive player in this edition of IPLÂ pushed a tongue-in-cheek tweet on the incident.

“Now that actually looks like @GautamGambhir size bat ! #IPL2015,” Yuvraj, who at Rs. 16 crore is IPL’s most expensive player this season, tweeted.