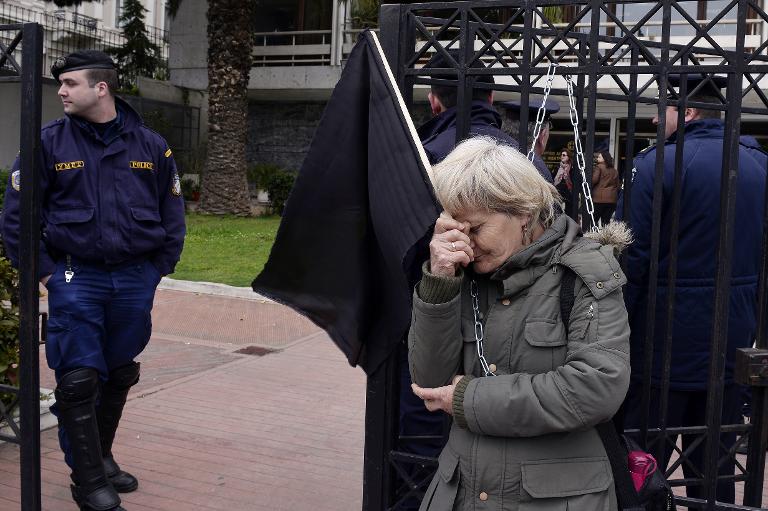 Greece is due to make its 459 million euro ($495 million) April loan payment to the IMF Thursday following days of uncertainty, but the European nation’s ability to honour its debts remains a source of acute anxiety to creditors.

As Greek Prime Minister Alexis Tsipras launched a two-day charm offensive in Moscow on Wednesday, the order for the payment had already reached the Bank of Greece, a source familiar with the details told AFP.

Additionally, interest payments of just under 400 million euros and the renewal of 2.4 billion euros in six- and three-month treasury bonds due to mature on April 14 and 17 were also assured, according to the source.

It would be “impossible for Greece not to service its debts this month,” the source said.

But despite government reassurances and the raising of 1.14 billion euros from the sale of six-month bonds on Wednesday, mostly to domestic buyers, Greece remains in a precarious position, shut out from international debt markets and reliant on short-term bonds for borrowing.

Greek banks are dependent on the European Central Bank for financing, but the eurozone’s central bank no longer accepts Greek sovereign bonds as collateral for loans.

IMF chief Christine Lagarde said late Sunday that Greek Finance Minister Yanis Varoufakis had pledged to make the payment on time in a meeting in Washington, but that failed to quell speculation that the hard-left government was finding it increasingly difficult to raise money to pay its debts.

Since 2010, Athens has received two successive loans from the EU and the IMF totalling 240 billion euros in exchange for tough austerity measures and sweeping economic reforms.

Tsipras’s government, which took power in January, has engaged in difficult negotiations with European leaders to continue receiving support while easing the austerity requirements in order to boost economic growth.

Experts from the IMF and the European Union are scrutinising a list of economic reforms proposed by Athens in a bid to unlock another 7.2 billion euros in loans to stave off possible bankruptcy.

Tsipras himself fuelled market fears over Greece’s readiness to pay its debts when he warned German Chancellor Angela Merkel in a letter last month that Athens would not be able to service its debt without more financial help from the European Union.

And in a move that risks further irritating European neighbours, Tsipras has made no secret of seeking closer ties to Russia at a time when Moscow is at loggerheads with the European Union over the conflict in Ukraine.

In his meeting with Putin Wednesday, warm words were exchanged and a vague “joint action plan” on cooperation was agreed upon, with Putin insisting Athens has not asked for financial aid and that a Russian embargo on Greek produce would remain as part of a wider ban on EU agricultural imports.

Greece was particularly hard-hit by the January embargo decision, which was instituted in retaliation for sanctions imposed by the bloc against Moscow, as more than 40 percent of its exports to Russia were farm products.

In a sign of potential compromise, a proposal to set up joint Russian-Greek companies based in Russia that would provide a loophole in the ban were mooted on Wednesday by a Greek government source, under which Greek fruits and vegetables would not be considered as exports.

“There is a desire from both sides to launch a procedure whereby Russia-based joint companies for Greek exporters of agricultural products,” said the source.

Greece and Russia have talked up the possibility of closer economic ties between the two Christian Orthodox nations ahead of the visit — set to be followed by another trip to Moscow for Tsipras for WWII victory anniversary commemorations in May.

Also prominent among the issues on the agenda on Wednesday was gas and energy cooperation, with Putin and Tsipras mentioning the possibility of Greek involvement in Moscow’s new Turkish Stream pipeline project.

Energy Minister Panagiotis Lafazanis said Tuesday Greece had a “national interest” and was “strongly interested” in extending the planned Turkish-Russian pipeline to its territory.

Back in Brussels, eurozone experts were due to begin the second day of a working meeting Thursday on Greece’s reform demands submitted at the end of March.

The discussions were only making “small steps”, even “baby steps”, a source close to the negotiations said Wednesday.

And the Eurocrats are far from Tsipras’s only problem: on Thursday a demonstration organised by civil servants’ union Adedy will be held in opposition to the IMF payment, the completion of which is seen as kowtowing to debtors at the expense of workers.

The demonstrators’ call? That Greece’s debt to be wiped out immediately, and in full.