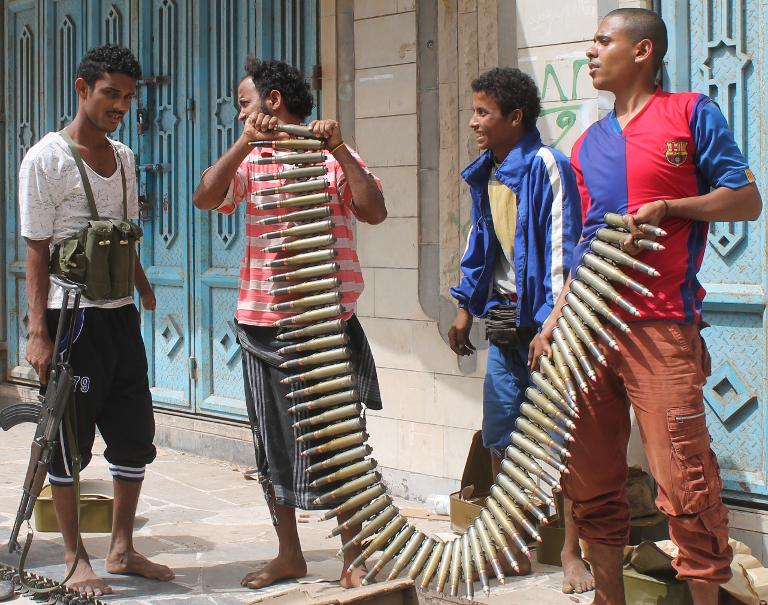 Washington deepened its involvement in the Saudi-led air war in Yemen Wednesday as aid agencies scrambled to deliver help to civilians caught up in the campaign now heading into its third week.

The Red Cross has warned of a “catastrophic” situation in main southern city Aden where militia loyal to fugitive President Abedrabbo Mansour Hadi have been holding out against Huthi Shiite rebels and their allies within the security forces.

Scores of people have been killed or wounded in the street fighting in the heart of the port city and aid agency Doctors Without Borders said it feared many more had been unable to reach hospitals.

The main Shiite power Iran, which has strongly opposed the Saudi-led intervention, stepped up its efforts for a negotiated settlement with a visit to Saudi ally Pakistan by Foreign Minister Mohammed Javad Zarif.

Islamabad has so far deflected appeals by Riyadh to join the coalition of nine — mainly Sunni — Arab countries intervening in Yemen, for fear of deepening sectarian divisions at home and across the Muslim world.

US Deputy Secretary of State Antony Blinken said Washington was stepping up weapons deliveries and intelligence sharing in support of the Saudi-led coalition.

“Saudi Arabia is sending a strong message to the Huthis and their allies that they cannot overrun Yemen by force,” Blinken told reporters in the Saudi capital late Tuesday.

“In support of that effort we have expedited weapons deliveries,” he said after talks with Defence Minister Mohammed bin Salman and other Saudi officials.

A US defence official told AFP that Washington was sending primarily precision-guided munitions.

The coalition launched its air war on March 26 as the rebels and their allies closed on Hadi’s last refuge Aden, prompting him to flee to neighbouring Saudi Arabia.

Riyadh accuses Tehran of backing the rebels and has vowed to bomb them into surrender to prevent them establishing a pro-Iran state on its doorstep.

But the rebels have powerful allies within the security forces who have remained loyal to longtime strongman Ali Abdullah Saleh, forced from power in 2012 after a bloody, year-long, Arab Spring-inspired uprising.

Saudi-led warplanes also bombed rebel positions at the city’s international airport and the huge Al-Anad air base to its north, another military source said.

Al-Anad was a key monitoring post in Washington’s longstanding drone war against Al-Qaeda until it withdrew its troops as fighting intensified last month.

The deepening conflict has raised fears that the jihadists will exploit the power vacuum.

Last week, Al-Qaeda seized much of Hadramawt provincial capital Mukalla. On Tuesday, they attacked one of the last loyalist strongholds in the city.

US Defence Secretary Ashton Carter acknowledged on Wednesday that the fighting in Yemen was complicating Washington’s counter-terrorism efforts but vowed they would go on regardless.

“Obviously it’s always easier to conduct CT ops when there is a stable government willing to cooperate,” he said.

“That circumstance now obviously doesn’t exist in Yemen but that doesn’t mean that we don’t continue to take steps to protect ourselves. We have to do it in a different way, but we do and we are.”

As Iran’s top diplomat prepared to visit, Pakistan said it would take its time deciding whether to accept the Saudi request to join the coalition.

Prime Minister Nawaz Sharif said Pakistan was “not in a hurry” to decide and that diplomatic efforts were under way involving Turkey and Iran.

Turkish President Recep Tayyip Erdogan, who has expressed support for the coalition without providing military forces, held talks in Tehran on Tuesday.

“We both think war and bloodshed must stop in this area immediately and a complete ceasefire must be established and the strikes must stop,” his Iranian counterpart Hassan Rouhani said after their meeting.

Pakistan faces a tricky dilemma, as it has long enjoyed close ties with Riyadh and has benefited hugely from the oil-rich kingdom’s largesse.

But it has called for a negotiated solution, saying it does not want to take part in any conflict that would worsen sectarian divisions in the Muslim world.