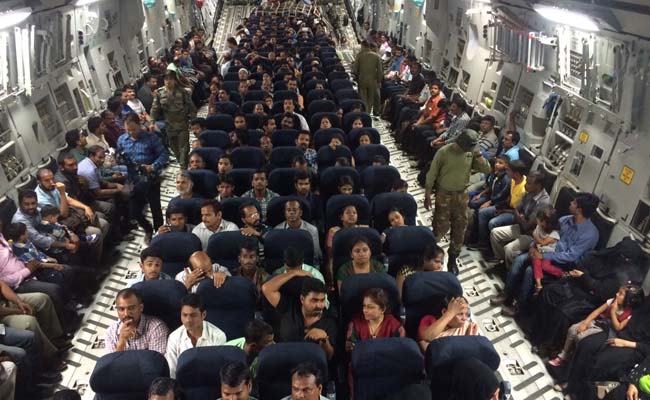 Mission Accomplished. In what may just be the greatest diplomatic coup in Indian history, the Indian government is looking to wrap up Operation Raahat with almost all the estimated 4000 Indians in Yemen evacuated safely from the war zone.

The Indian Navy’s INS Tarkash will reach Djibouti from Al Hodeidah with 74 people this morning and the INS Sumitra will reach Al Hodeidah, to ferry out one of the last batches. Air India will run its last evacuation flights from Yemeni capital Sana’a and the government has asked all Indians who want to leave to reach the capital.

On Monday, India rescued more than 1,000 people by plane and ship, the second time in two days that such a large number have been brought out since Saudi Arabia launched air strikes against Iran-allied Houthi rebels in Yemen on March 26. India has been asked by 26 nations – including the United States – to help get their citizens out of the conflict zone.

The Indian Navy Ship Mumbai, a premier warship, rescued nearly 1000 people from nine countries in two batches. Though not designed to ferry people, the Mumbai carried one and a half times the number of crew on board.

The crew emptied five messes and their cabins so that women and children got bunks to sleep on. Hot food was served and doctors were at hand.
Â
Other warships, the INS Sumitra and the INS Tarkash have done a similar job across the coast of war-torn Yemen.

While the Navy has ferried people across the Red Sea to Djibouti in the Horn of Africa, the Indian Air Force has been flying the Indians back home on C 17 Globemasters.

Sabah Shawesh and her eight-month-old baby Ryan are back home in Mumbai now. “I am so much thankful to her and to all her incredible team who did the whole process of evacuation,” Sabah said. Â
Â
11 Indians who were evacuated by the Pakistan Navy’s Aslat from Yemen’s southeastern city of Mukallah reached Karachi and are expected to return home today.

More than 540 people have died and 1,700 have been wounded in Yemen since March 19, the World Health Organization has said. At least 74 children had been killed since the coalition strikes beganÂ  – though the real figure is thought to be much higher – and more than 100,000 have been displaced, the UN said.

Ministry of External External Affairs (MEA) on Monday said that 26 countriesÂ have requested India to evacuate their citizens from strife-hit Yemen.

Countries thatÂ have sought India’s assistance in evacuating its nationals from the war-ravaged country,Â includes, USA, France, Germany, Sweden, Singapore, Malaysia, Ireland, Nepal, Sri Lanka, Bangladesh, Iraq among others.Â While Pakistan has not sought help for the evacuation of its nationals, India during the operation also rescued Pakistani nationals.

India on Monday evacuated 1052 of its nationals from Yemen, taking the total number ofIndiansÂ rescued from the strife-torn country to nearly 3,300 as the government was looking at wrapping up the massive evacuation operation ‘Rahat’ in a couple of days.

On Sunday, foreign minister Sushma Swaraj had assured that all Indian nationals would be evacuated from the strategically-placed country in the Middle East.

Earlier on Monday, defence minister Manohar Parrikar said “nearly all Indians would be evacuated from Yemen by Monday evening,” as he praised the Navy for facilitating safe return of people from the Arab country where fighting is raging between security forces and Houthi rebels.

Parrikar, who was in Mumbai to inaugurate the undocking of first Scorpene submarine, said, “Almost all Indians would be evacuated from the strife-torn Yemen by this evening.”

Praising the Navy for its “great job” in ensuring safe passage of Indians from the troubled spot under rescue exercise named “Operation Rahat”, Parrikar said “so far we have evacuated 3,000 Indians and some foreigners in desperate situation.”

In a series of tweets, he said the evacuation efforts reflect the government’s willingness to serve its people and readiness to help others in distress, which is India’s ethos.

“Salute the services of our civilian & defence officials & organisations in helping evacuate our citizens from Yemen.Â Continue your efforts,” he said.

Yemen has been witnessing fierce battle between Saudi-led coalition and Shiite rebels, who have battled their way into various cities Yemen including in the former stronghold of President Abedrabbo Mansour Hadi who has fled overseas.Â