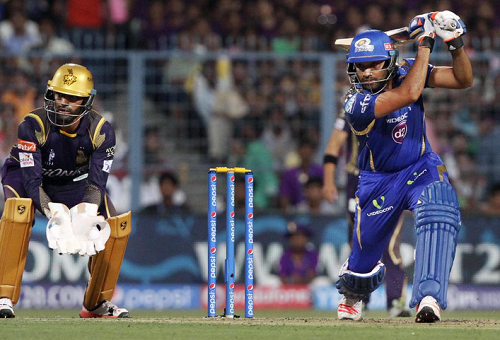 The Indian Premier League curtains rose with the Mumbai Indians taking on defending champions Kolkata Knight Riders. The KKR team managed to tighten the noose around MI, never allowing them to get back into the groove, restricting them to 168/3 in the stipulated 20 overs. Rohit Sharma (98) and Cory Anderson (55) starred for the Mumbai outfit.

The encounter began with Gautam Gambhir winning the toss for KKR and electing to bowl first. Rohit Sharma and Aaron Finch took guard against Umesh Yadav and it was an early blow for the Mumbai side as Morne Morkel got Finch for 5 in the very second over, bringing Tare into the middle.

Rohit Sharma began doing what the doctor ordered, slamming Yadav for three boundaries. Tare followed suit, but Shakib al Hasanâ€™s introduction into the bowling attack managed to give KKR the breakthrough they were looking for in the form of Tare for 7. At the end of the 5th over, the score was 37/2. Rayudu was the next man in, but he played a blink and miss innings, wrapping up his stay in the 6th over, taken by Morkel for 0.

Cory Anderson was the next man to walk in and together with skipper Sharma, took the score to 57/3 in 10 overs.The duo continued on firefighting mode, with the Kolkata bowlers sharp as ever. Sharma continued putting up a brave front, notching up the first half century of this edition, MI crossing 100, taking the score to 101/3 in 15 overs. Sharma began dispatching across the ropes, as did Anderson closing the MI scorecard at 168/3