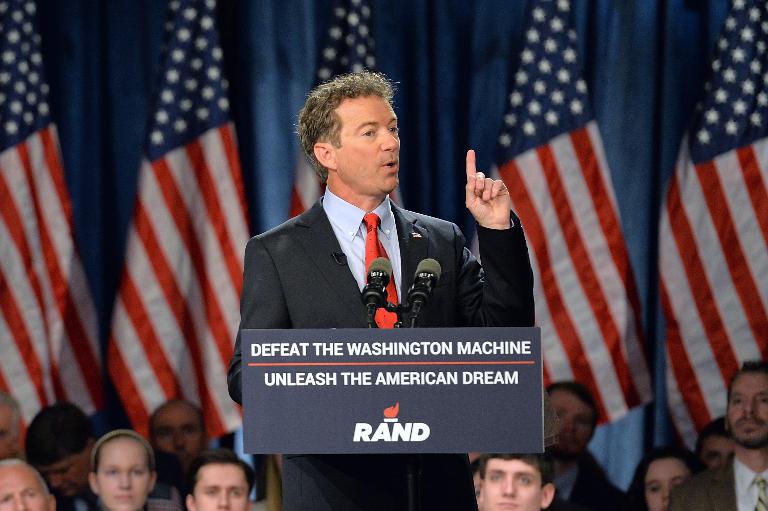 Conservative US Senator Rand Paul on Tuesday formally launched his 2016 White House bid, the second Republican to join what is expected to be a crowded contest for the party’s nomination.

Paul, a conservative libertarian who was elected to the Senate in 2010 with strong support from the Tea Party movement, wasted no time in lashing out at the traditional political establishment, including his own party.

“The Washington machine that gobbles up our freedoms and invades every nook and cranny of our lives must be stopped,” Paul told cheering supporters at a rally in Louisville, Kentucky, where he serves as senator.

“Big government and debt doubled under a Republican administration and is now tripling under Barack Obama’s watch,” he added, noting that Republicans had too often “squandered” their time in Washington.

Jeb Bush, brother of former president George W. Bush, leads in opinion polls for the primary elections, although he has yet to officially announce his candidacy.

On the Democratic side, former first lady Hillary Clinton has a team and campaign machine in place, suggesting she will announce in the coming weeks.

It was by defying the Republican “establishment” that Paul, 52, launched his political career in 2009. This was at the start of the anti-tax and small-government movement known as the Tea Party that would come to exercise a powerful influence within the Republican Party.

Billing himself as a different kind of Republican leader, Paul will look both to rally ultra-conservatives during the primaries and then broaden the base of his party among young people, independents and minorities.

Paul’s message of reduced government appeals to supporters who fear an over-intrusion into Americans’ private lives by agencies such as the National Security Agency.

“I like hearing that he wanted to end NSA dragnet surveillance on his first day as president,” said 27-year-old Will Greg, a Nashville business owner.

Indicative of his efforts to make a broad appeal, Paul’s campaign store offers everything from “cool” fashion accessories to a “NSA Spy Cam Blocker” meant to stop government use of a computer’s web cam.

The senator’s father, Ron Paul, a longtime member of the House of Representatives, was a libertarian candidate for the presidency — conservative on economic issues but liberal on social issues.

His son prefers the term “libertarian conservative” to describe himself, or a “constitutional conservative,” taking care to break with libertarian positions considered too strict or even marginal.

He has pushed against the NSA surveillance programs and has promoted criminal justice reform to end mandatory jail term minimums, endearing himself with libertarians.

On foreign policy, Paul has long been in favor of US disengagement, going as far as proposing an end to all US foreign aid.

– Better to take on Hillary-

But Paul has nuanced his positions on some issues.

He recently proposed an increase in the Pentagon budget. And on gay marriage and abortion, he has moved toward the traditional Republican position against both.

“So yes, he has taken some positions that libertarians are grumbling about. But it’s still the case that if you look at the big picture, while he may not be a libertarian, he is the most libertarian of the candidates,” said David Boaz, executive vice president of a libertarian think-tank, the Cato Institute.

“He’s doing a balancing act, first to win Iowa and New Hampshire, then to win the nomination, then to win the general election,” said Boaz, who wrote a book entitled “The Libertarian Mind.”

Democrats and some of Paul’s rivals say instead that he is just an opportunist.

“Unfortunately for Paul, it doesn’t matter how many times he tries to reinvent himself. His policies are entirely outside the mainstream,” said Michael Tyler, a spokesman for the Democratic Party.

In Kentucky, Paul’s longtime supporters within the Tea Party are avid about this self-proclaimed anti-establishment candidate.

“I like him a lot,” said John Hodgson, president of the Louisville branch of the Tea Party.

“He has modified some of his statements to be less isolationist, and I think that is a more practical view of the world,” Hodgson added.

In order to insist to his critics that he can break out of the Tea Party mold and rise, Paul has repeatedly cited polls that describe him as the best Republican candidate to take on Clinton.

“Nobody is doing better against Hillary Clinton than myself,” he said recently on Fox News.