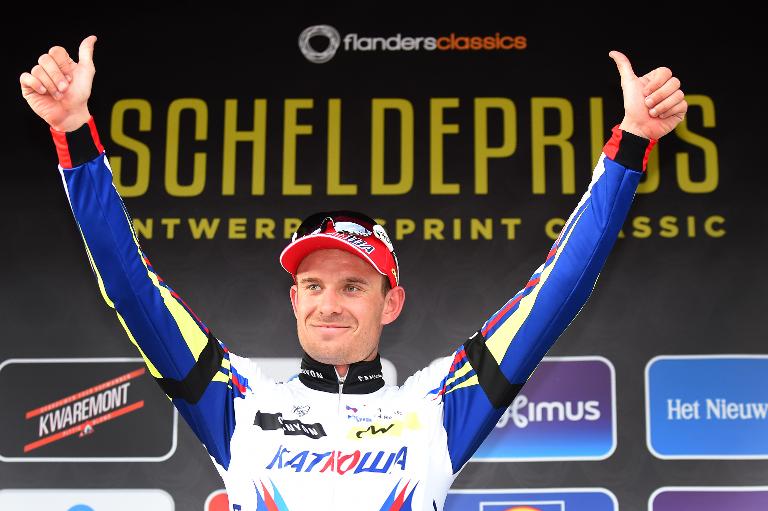 It was the 26-year-old’s third win in a week having triumphed in the prestigious Tour of Flanders on Sunday and won Three Days of De Panne last week, claiming victory as well in three of the four stages.

“My team put me in the ideal conditions and with my current form all I needed to do was finish off this work,” said Kristoff.

It was a great day for his Katusha team as Joaquim Rodriguez also won the third stage of the Tour of the Basque Country.

The Russian outfit have had great success recently with Luca Paolini winning Gent-Wevelgem a week before Kristoff’s Flanders victory.

The Norwegian’s season also saw him finish second in Milan-San Remo and Kuurne-Brussels-Kuurne in March, behind respectively John Degenkolb and Mark Cavendish.

And although he himself has played down his hopes, he will likely be installed as the favourite for this weekend’s Paris-Roubaix cobbled classic.

“I’ve never had amazing results in this race (Paris-Roubaix). There are specialists and I’m not one of them,” insisted Kristoff.

A massive crash in the sprint finish took down a huge number of riders at high speed.

But Kristoff was amongst a small band of about 20 to avoid the carnage and contest the victory, with the Norwegian proving too strong for the rest.

With the likes of Italian sprinter Elia Viviani going down in the crash, Belgian Edward Theuns took second and Yauheni Hutarovich of Belarus finished third.

The previous three years Scheldeprijs had been won by the man widely believed to be the best sprinter of the moment, Germany’s Marcel Kittel, winner of four stages in each of the last two editions of the Tour de France.

However, Kittel, Cavendish and German Andre Greipel all missed Scheldenprijs this year, denying Kristoff to test himself against the three best sprinters in the world.