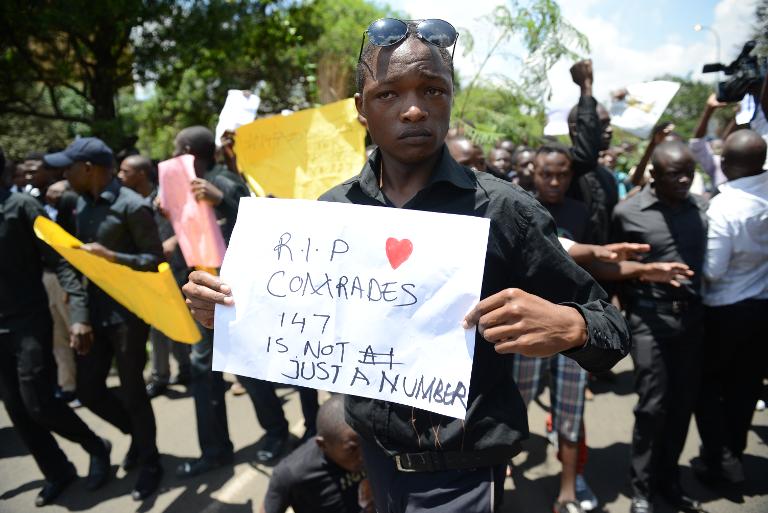 Hundreds of Kenyans took to the streets Tuesday demanding greater security following last week’s massacre by Somalia’s Shebab Islamists, on the final day of mourning for the 148 people killed by the militants.

The demonstrators waved placards and chanted slogans as they marched on the streets of the Kenyan capital and the northeastern town of Garissa, where the massacre was carried out.

“We are mourning the loss of our fellow comrades, we have lost the vibrant blood that would have built tomorrow’s Kenya,” said Maureen Mucheri, 21, an engineering student at Nairobi University.

Later, hundreds gathered in a far quieter and deeply emotional demonstration in the capital, carrying flowers and lighting candles in front of scattered white crosses to remember those lost, at the end of the third and final day of national mourning.

The names of the victims were slowly read out amid the flickering candle light, with the solemn crowd quietly repeating their names.

Security forces meanwhile continued their hunt for those behind the university killings.

Earlier, in Garissa, several hundred people gathered at a rally where both Muslim and Christian leaders called for unity, with local Muslim leader Abdullahi Salat condemning the “violent and evil attack”.

Kenyan fighter jets pounded camps belonging to the Al-Qaeda-linked insurgents in southern Somalia on Monday, but anger has been growing over allegations that critical intelligence warnings were missed.

The extremists lined up non-Muslim students for execution in what President Uhuru Kenyatta described as a “barbaric medieval slaughter”.

Students in the demonstration carried placards with the slogan “147 is not just a number”, referring to the death toll in the massacre – although that has since risen to 148.

The massacre, Kenya’s deadliest attack since the 1998 bombing of the US embassy in Nairobi, claimed the lives of 142 students, three police officers and three soldiers.

“We shall not forget,” the Standard newspaper front-page read, as news media printed the faces of those killed in the attack, even as scores of relatives continue an agonising wait for the remains of their loved ones at the main mortuary in Nairobi.

Boniface Mwangi who organised the vigil in Nairobi’s Uhuru Park — or “Freedom” in Swahili — has been deeply critical of the country’s security failings.

“Entrenched corruption in the security system allows Al-Shebab to move freely in and out of Kenya and carry out such attacks with ease,” said Mwangi, a civil society activist.

The army said Monday’s airstrikes destroyed two Islamist bases, and followed a promise by Kenyatta that he would retaliate “in the severest way possible” against the Shebab militants for their attack last Thursday.

Kenyan warplanes have made repeated strikes in southern Somalia since sending troops into their war-torn neighbour in 2011 to attack Shebab bases, with Nairobi later joining the African Union force fighting the Islamists.

On Saturday, Shebab warned of a “long, gruesome war” unless Kenya withdraws its troops from Somalia.

A Nairobi court on Tuesday ordered five Kenyans and a Tanzanian to be detained for 30 days while police investigate possible connections to the attack.

A $215,000 (200,000 euro) bounty has also been offered for alleged Shebab commander Mohamed Mohamud, a former Kenyan teacher said to be the mastermind behind the attack and believed to now be in Somalia.

Authorities have named one of the four gunmen killed as a fellow Kenyan — a once promising university law graduate called Abdirahim Abdullahi, an ethnic Somali — highlighting the Shebab’s ability to recruit within the country.

Although Kenyatta has vowed to retaliate for the massacre, there have also been calls for national unity.

In an address to the nation on Saturday, Kenyatta said people’s “justified anger” should not lead to “the victimisation of anyone” — a clear reference to Kenya’s large Muslim and Somali minorities in a country where 80 percent of the population is Christian.