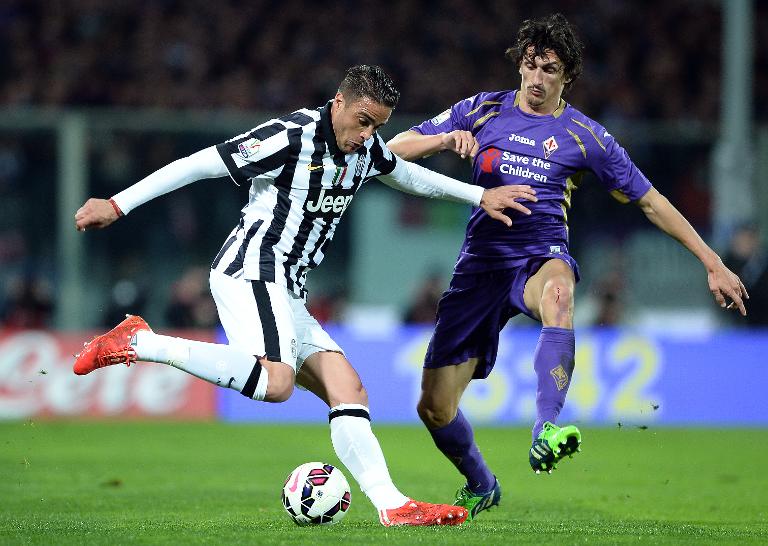 They will face either holders Napoli or Lazio in the final. Those sides are level at 1-1 from the first leg in Rome and meet in Naples on Wednesday.

Juve’s deserved victory provided a welcome boost ahead of their Champions League quarter-final, first leg against Monaco next week.

They simply proved too strong, physically, mentally and technically for Fiorentina.

And with a 14-point lead over second-placed Roma in Serie A, the reigning champions remain on course for a treble, last achieved by Jose Mourinho’s Inter Milan in 2010.

Last year, Juve knocked Fiorentina out of the Europa League, winning 1-0 away following a home draw, and once again they proved ruthless on their travels.

Tevez’s replacement Matri opened the scoring on 21 minutes after mopping up the loose ball when Pereyra’s shot was blocked.

Pereyra was then on hand to knock home the rebound after goalkeeper Neto saved from Alvaro Morata just before half-time.

Due to the away goal rule, Juve went into the game knowing they had to score at least twice to avoid going out but with 45 minutes to play, they were a goal to the good on aggregate.

Bonucci’s volley from a corner just before the hour mark killed off the match, with Fiorentina now needing to score three goals to progress as Juve had the away goals advantage at that juncture.

The only black mark for Massimiliano Allegri’s men was a red card to Morata three minutes from time for a tackle from behind on Alessandro Diamanti.