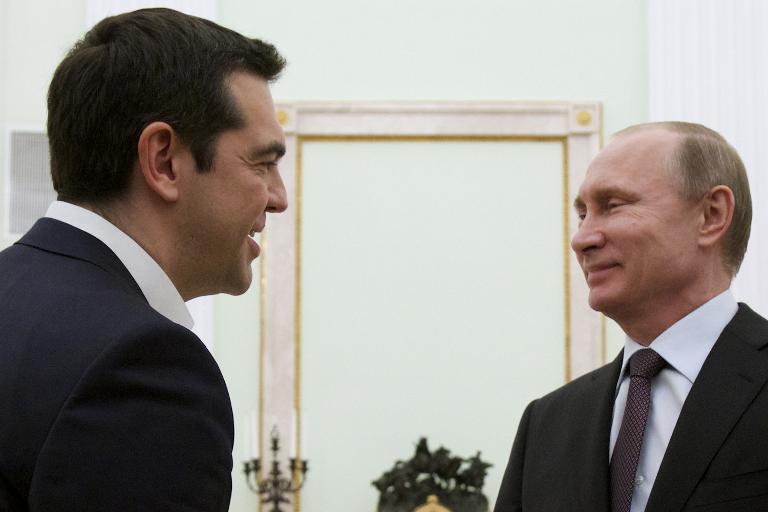 Greek Prime Minister Alexis Tsipras on Wednesday lashed out at EU sanctions against Russia during talks with Kremlin strongman Vladimir Putin in Moscow that have unnerved Brussels.

Tsipras’ sit-down with Putin had fuelled fears on the continent that cash-strapped Athens could be cosying up to Moscow with Greece facing a Thursday deadline to repay debts worth 460 million euros.

Former communist Tsipras, who is also struggling to unblock an EU and IMF aid funds, has made no secret of seeking closer ties to Russia at a time when Moscow is at loggerheads with the European Union over the conflict in Ukraine.

“Greece is a sovereign state with an indisputable right to its own foreign policy,” Tsipras said after the Kremlin meeting.

“To get out of this profound crisis we need to leave behind this vicious cycle of sanctions,” he said.

But despite warm words and a vague “joint action plan” on cooperation there were no concrete results from the encounter, with Putin insisting Athens has not asked for financial aid and an embargo on Greek produce would remain.

“We cannot make an exception for one country in the European Union,” Putin said of the import ban Russia imposed in retaliation at Western sanctions.

European leaders had been nervously watching the encounter as fears swirl that Putin could use Greece as a Trojan Horse to disrupt Europe’s shaky stance over Ukraine.

But Putin denied he was trying to manipulate Athens in a bid to improve Russia’s standing on the continent in a “fragmented fashion”.

“We are not forcing anyone to do anything,” he said.

Both sides have talked up the possibility of closer economic ties between the two Christian Orthodox nations ahead of the visit — set to be followed by another trip to Moscow for Tsipras for WWII victory anniversary commemorations in May.

Prominent among the issues on the agenda was gas and energy cooperation with Putin and Tsipras mentioning the possibility of Greek involvement in Moscow’s new Turkish Stream pipeline project.

Ahead of the meeting in Moscow European leaders cautioned Athens against getting too friendly with Russia as debt negotiations remain so tense.

“It’s perfectly normal for talks to take place but I would urgently warn against getting closer,”Austrian Finance Minister Hans Jorg Schelling said in a radio interview.

“We are in the middle of final negotiations for financing for Greece and I don’t believe that a good game is being played here.”

Margaritis Schinas a spokeswoman for the European Commission called for continued unity from Europe over the Ukraine crisis.

“Up until now we have all been united and we hope to remain united,” she said.

Greece’s media on Wednesday was split on the visit with left-leaning newspapers that support Tsipras saying all issues were on the table in Moscow.

Leading centrist daily Te Nea warned that the Greek leader faced “a complicated game of chess in Moscow” as he has to balance bolstering economic ties with Russia while not upsetting Greece’s EU partners.

Analysts in both Russia and Greece had played down the likelihood of any major breakthrough ahead of the Putin-Tsipras meeting, with Russia embroiled in an economic crisis of its own.

A potential lifting of Moscow’s import ban that has hit the Greek agricultural and fruit growing sector hard had been mooted.

Russia last summer issued a blanket ban on importing most agricultural products from the EU, in retaliation for sanctions imposed by the bloc against Moscow. Greece was particularly hard-hit as over 40 percent of its exports to Russia were farm products.

Greek analysts said that Tsipras was using his trip to Moscow to burnish his credentials at home as someone willing to stand up to the EU.

But expert Constantinos Filis said that the visit to Moscow was more show than substance and intended only as a warning shot across Europe’s bows.

“The Tsipras government seeks to leave ambiguity hanging over its intentions as if to tell the Europeans ‘Don’t take us for granted,'” Filis said.

“Greece needs the EU and Russia needs Greece to remain part of the EU and NATO in terms of the support it can offer against criticism and economic sanctions.”