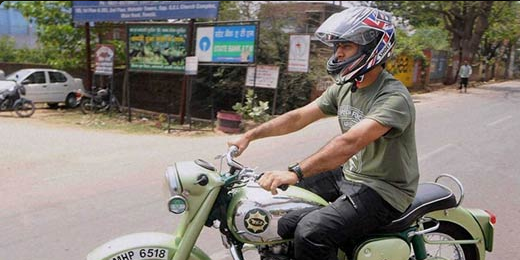 Ranchi: Team India’s skipper, Mahendra Singh Dhoni was charged with violation of traffic rules by the Ranchi Traffic PoliceÂ on Tuesday. Captain Cool had to pay a fine of Rs 500 for the same.

The vintage bullet BSA Gold Star DBD 34 (MHP-6518), which he rode on the city streetsÂ on Monday, violated Motor Vehicle Act guidelines pertaining to display and use of numberplate, Ranchi traffic police saidÂ on Tuesday.

For this, Dhoni was fined Rs 500 under section122/179 of MVI Act by the Ranchi Traffic Police.

As per the MVI Act, the registration number of a bike should be written on a horizontal plate and should not be obstructing the vehicle’s front part or rear end.

According to Dhoni’s family, he was unaware of it. Dhoni was out on his bullet to go around his native town.