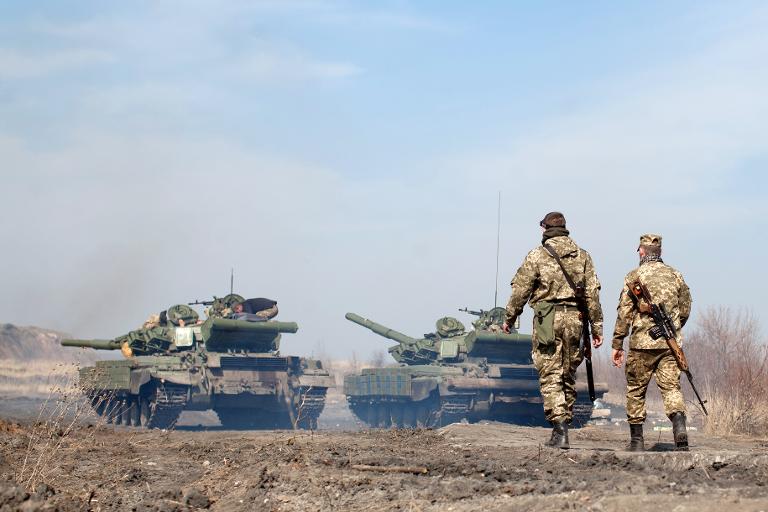 The controversial leader of Ukraine’s ultra-nationalist Pravy Sektor paramilitary group, which is fighting pro-Russian rebels alongside government troops, was made an army advisor Monday as Kiev seeks to tighten its control over volunteer fighters.

Coming on the anniversary of the start of fighting in Ukraine, the move marks a key step in government efforts to establish authority over the several private armies that share its goal of crushing pro-Russian separatists in the east, but do not necessarily operate under its control.

While some such militias answer to the interior ministry and receive funding, the powerful Pravy Sektor or “Right Sector” militia, which currently claims 10,000 members including reservists — but will not say how many are deployed at the front — had until now refused to register with the authorities.

Its posture is expected to change following Monday’s announcement by the defence ministry of the appointment of its leader, Dmytro Yarosh, a hate figure in Moscow who was elected to Ukraine’s parliament last year, as advisor to the army chief of staff Viktor Muzhenko.

“Dmytro Yarosh will act as a link between the volunteer battalions and the General Staff,” armed forces spokesman Oleksiy Mazepa told AFP.

“We want to achieve full unity in the struggle against the enemy, because now our aim is the cooperation and integration of volunteer battalions in the armed forces,” he added.

Asked whether the appointment might anger the West, political analyst Taras Beresovets said becoming army advisor “does not make him an influential person in the armed forces.”

“I do not remember hearing official criticism of Yarosh or the ‘Right Sector’ by any country except Russia,” he added.

Many militia groups have been fighting on both sides of the frontline in Ukraine since the war began a year ago this week, and the issue of control is key to avoiding rights violations and keeping armed groups from going rogue.

Pravy Sektor are highly-trained and known for their tough discipline and their ban on drinking alcohol. The group dates back to the street fighting during the Maidan protests in Kiev and has sent units to some of the hottest flashpoints on the frontline in Ukraine’s year-long war.

“Volunteer battalions are weaker than armed forces units in terms of technical equipment,” Sergey Zgurets, a military expert at the Defense Express consultancy, told AFP. “But they have the advantage in terms of morale.”

President Petro Poroshenko has been working hard to bring up to strength the regular army, which now numbers 184,000 and is to swell to 250,000. Efforts are being made also to increase defence production.

Yarosh is widely reviled in the separatist east and Russian media as a far-right bogeyman and is wanted by the authorities in Moscow on an international warrant for “incitement to terrorism”.

He was injured in January in fighting around Donetsk airport, which finally fell to the separatists after months of combat.

A spokesman for the nationalist hardliner told AFP that Pravy Sektor would remain independent from government control but would now receive funds from the defence ministry.

“Our combatants will be well-armed from now on as up until now equipment was supplied by volunteers,” said Artem Skoropadskiy.

Pravy Sektor, which includes a political party that was founded in March last year as well as its military battalions, “is nationalist not fascist”, Yarosh once told AFP in an interview.

It rose to prominence during the Maidan protests and claims roots in the controversial legacy of Ukraine’s World War II nationalists, who for a time collaborated with the Nazis against the Soviet Union, then fought against the Nazis.

Yarosh won more than 120,000 votes in May 2014 presidential elections and was elected to parliament with around 27 percent of the vote in the seat he contended.