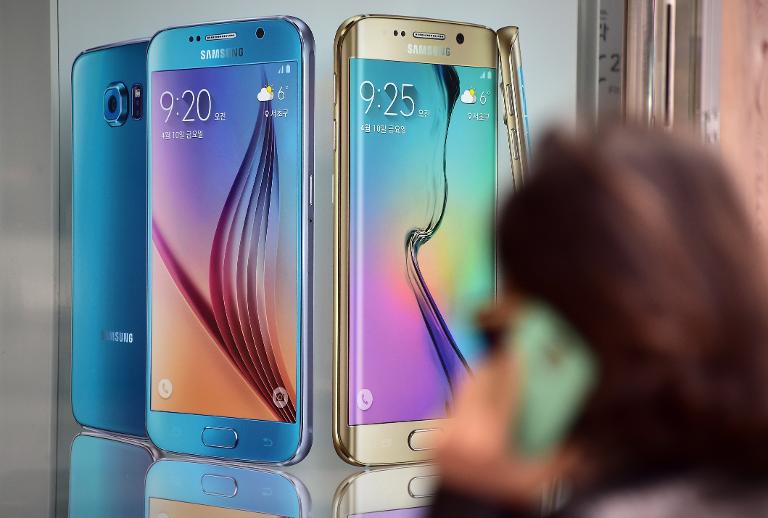 The forecast was down 30.5 percent from a year ago, but beat average analyst expectations of around 5.5 trillion won, and was up 11.5 percent from the previous quarter.

Sales would likely reach 47 trillion won, down 12.4 percent from a year ago, Samsung said in its quarterly earnings estimate, which came days ahead of the much-anticipated launch of its latest flagship smartphone, the Galaxy S6.

Samsung hopes the new model will re-establish it as the clear global smartphone market leader over arch-rival Apple, which has enjoyed booming sales of its iPhone 6.

Several market trackers had Apple and Samsung tied in worldwide smartphone sales in the fourth quarter of 2014, while at least one suggested Apple had regained the throne it lost to Samsung back in 2011.

Samsung has seen profits sag since late 2013 due to heightened competition in the increasingly saturated smartphone market.

It has faced a double challenge from Apple in the high-end market and rising Chinese firms like Xiaomi and Lenovo in the mid- and low-end market.

Tuesday’s estimate, which comes ahead of audited results to be released later in the month, did not provide a net income figure.

It also gave no breakdown of divisional earnings, but analysts attributed the better-than-expected performance to profits from high-margin chip sales, which helped cushion the downturn in its overgrown mobile sector.

The company — which produces a range of electronics products from chips to household appliances — saw profits in its semiconductor division jump 35.7 percent on-year in the fourth quarter.

South Korea’s top firm by value saw its share price fall 0.54 percent on the Seoul stock market on Tuesday, with analysts saying the quarterly estimate had already been largely factored in.

“I estimated the second-quarter operating profit at 6.4 trillion won but plan to raise it,” Nam said.