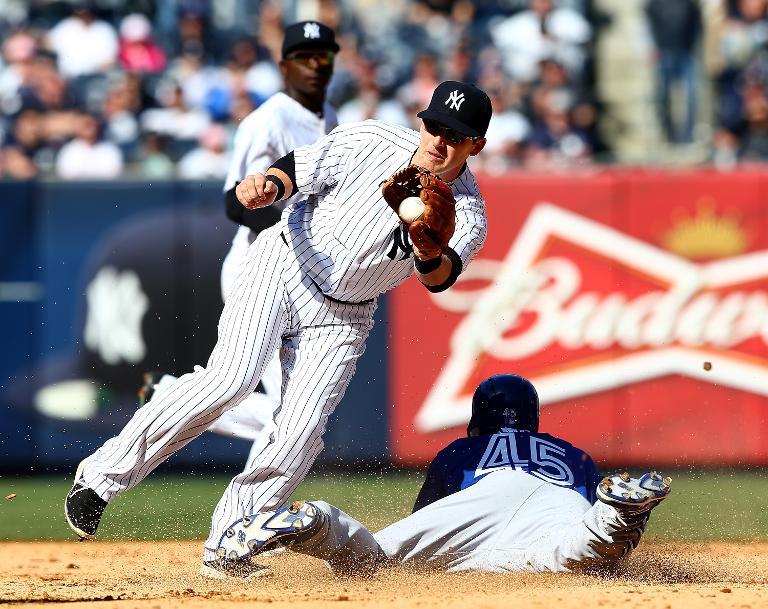 Hanley Ramirez made his Boston season debut a memorable one and the Toronto Blue Jays spoiled A-Rod’s return to the Bronx in the busiest opening day in Major League Baseball history.

Ramirez highlighted a smashing day for the heavy hitters, belting a grand slam as 28 teams started their 2015 seasons Monday.

But there were plenty of brilliant pitching performances as well, including New York Mets Bartolo Colon who outduelled Washington newcomer Max Scherzer, while Seattle’s Felix Hernandez and Cincinnati’s Johnny Cueto both reached 10 strikeouts and Oakland’s Sonny Gray flirted with a no-hitter.

Dustin Pedroia smashed two homers and Mookie Betts blasted the other for Boston, who lost 91 games last season after winning the World Series two years ago.

Clay Buchholz struck out nine and scattered three hits to go with a walk over seven scoreless innings in his first opening day start.

Ramirez downplayed his home run contribution and credited Buchholz with the win.

“The best thing I saw was Buchholz,” he said. “He threw a lot of strikes. That gets you going.”

Boston is hoping to return to the playoffs after an offseason that saw them open their wallets with the acquisitions of Ramirez and Pablo Sandoval.

Monday’s loss also marked the first game for the Yankees without their star infielder Derek Jeter, who retired at the end of last season.

The three-time American League MVP Rodriguez got a warm reception from the Yankee Stadium fans, hearing cheers during the pre-game introductions and then later chants of “A-Rod, A-Rod” from the outfield bleachers.

Rodriguez, back from a lengthy league-imposed suspension for his involvement in the Biogenesis performance-enhancing drug scandal, finished one-for-two with a walk while serving as New York’s designated hitter.

“I was more nervous opening day in spring training,” Rodriguez said. “I have had a lot of opening days but this is probably the most special.

“I haven’t had a hit in a long time. Felt good. The walk felt good to get on base. I saw the ball pretty well.”

The back-to-back suspensions and Rodriguez’s return on Monday comes as several former drug cheats, who were nabbed during the sport’s Steroid Era, are being welcomed back into the major leagues, including Barry Bonds who is expected to be given a new role with the San Francisco Giants this season.

“I don’t want to make a prediction but I think you are going to see him hit some homers,” Girardi said.

Lucas Duda hit a two-run single in the sixth inning and the New York Mets beat Scherzer and the Washington Nationals 3-1.

Despite the loss, Scherzer’s debut with the Nationals got off to a great start. The 2013 American League Cy Young award winner retired 17 in a row after walking Curtis Granderson to open the game.

But Colon had the biggest impact as the veteran right-hander allowed just one earned run with eight strikeouts in six innings.

Scherzer, who signed a seven-year, $210 million contract with the Nats in the offseason, was charged with three unearned runs on four hits over 7 2/3 innings. The right-hander struck out eight and walked two.

“I believe in the guys that are here. They can get the job done. That’s why we’re here,” Scherzer said. “We’re here to win and it’s frustrating any time you don’t.”

In Los Angeles, Jimmy Rollins made his Dodgers’ debut one to remember. Rollins’ three-run homer in the bottom of the eighth inning gave Los Angeles a 6-3 win over San Diego in a back-and-forth season opener at Dodger Stadium.

Gray took a no-hitter into the eighth as the A’s routed the Texas Rangers 8-0 in Oakland.