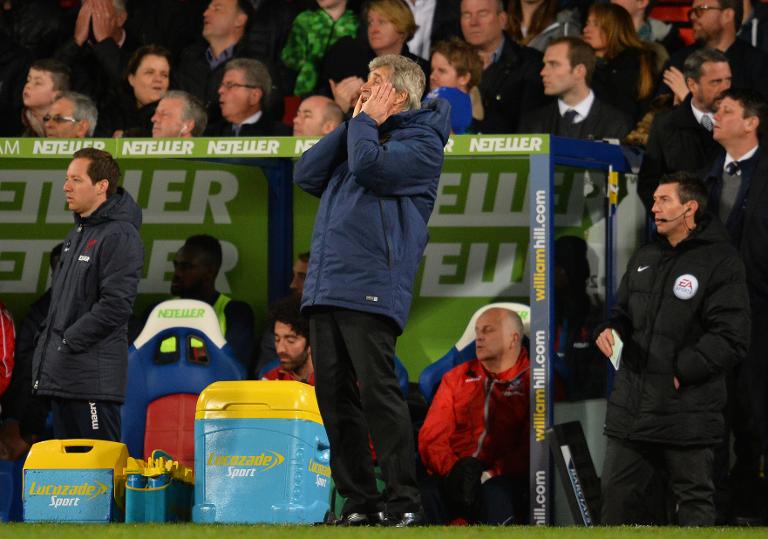 Manuel Pellegrini refused to write off Manchester City’s fading bid to retain the Premier League title despite a 2-1 defeat at Crystal Palace that left them nine points adrift of leaders Chelsea.

Pellegrini’s side have just seven games to close the gap and while City manager Pellegrini insisted he was happy with his side’s performance at Selhurst Park on Monday, their recent results suggest there is little chance of the champions reviving their challenge.

An inconsistent display in south London condemned City to a third successive away loss in the league for the first time since 2011 and Pellegrini’s team have now won just four of their last 11 league games.

However, the Chilean says his immediate concern is Sunday’s derby clash with Manchester United at Old Trafford, and not their prospects of overhauling Chelsea.

“We are not thinking about Chelsea and titles. We go each game and try to win. At the end of the season, we will see,” Pellegrini said when asked about City’s hopes of winning the league.

“Every point you drop makes it more difficult, but it’s the same answer. We are not thinking about the title… Just about the next game at Old Trafford.”

City’s failure to mount a more convincing title defence and the manner of their last 16 exit from the Champions League has raised questions about the manager’s future at the club.

“I do my work and am very happy. You maybe have a difficult season, but you never worry about things like this.”

Glenn Murray’s fifth goal in five games set Palace on course for the win in the 34th minute, although Pellegrini and his players were convinced the effort should have been ruled out for offside.

Jason Puncheon added a second with a 48th minute free-kick and while Yaya Toure gave City hope of a comeback with a 78th minute strike, Palace repelled the visitors’ late pressure.

“In different moments in football, you can win or lose. I hope we continue playing like we did today and we are more lucky,” added Pellegrini.

“It’s difficult to understand the result. We played a very good game from beginning to end, had a lot of chances to score.

“Crystal Palace scored the first goal which was clearly offside, and then a beautiful free-kick.

“It’s difficult to understand, but football happens like this.”

Palace manager Alan Pardew offered Pellegrini some hope the title race may yet produce some more twists and turns.

“But psychologically for Chelsea, with all the pack closing in on them, the next defeat or draw for Chelsea will be a big test. You wouldn’t want to lose that kind of lead.

“City are going to have to play on that. There’s a long way to go still, a lot of points up for grabs.

“But I can only look at us: we came up against a committed team; they weren’t lacklustre or poor. They were very good and we had to ride our luck.”

The win continued Palace’s revival under Pardew and having established themselves in mid-table, the manager believes the club can now start looking towards next season.

“We have 39 points on the board, so we’d like to think we’ll be back here in the Premier League next year,” he said.

“My job gets more difficult now after beating the champions here. Expectations will be higher. We have to keep improving on it.”