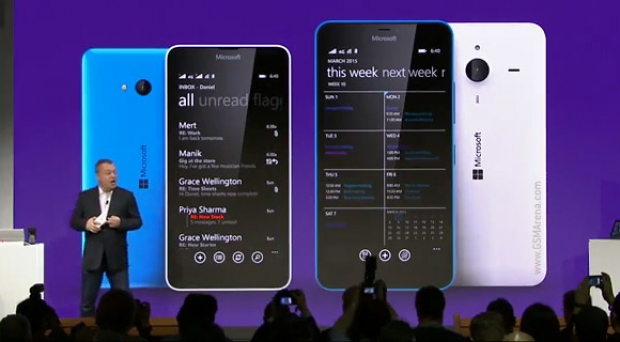 Both the phones will be available from Tuesday evening, with the former a Flipkart exclusive, and the latter available everywhere. The phablets were first unveiled at MWC 2015 along with their single-SIM and 3G variants.

The XL is also better equipped to handle the competition. It comes with a screen that uses ClearBlack technology, which should help it display more vivid colours. It also comes with the 13- megapixel rear camera that has Zeiss optics.

Other than the size, camera, battery capacity, and screen, the 640 and the 640 XL are identical. Both phones are powered by Snapdragon 400, a quad-core processor that runs at 1.2GHZ. Both have 1GB RAM, 8GB internal storage and support for microSD card.

Neither the 640 nor the 640 XL support 4G, though both come with dual-SIM feature with support for 3G.

Microsoft said 640 and 640 XL, which runs on Windows Phone 8.1 (Denim), would get free updates to Windows 10 in the coming months.

Speaking at the launch, Raghuvesh Sarup, director (marketing) at Microsoft Mobile Devices said, “Consumers today are constantly looking for a device to bring them more flexibility to switch easily between work and play.

The phone will be exclusively available on Flipkart, starting April 15. However, registrations for Lenovo A7000 begin on Tuesday.

The smartphone, initially unveiled at the Mobile World Congress in Barcelona, claimed to be the world’s first Android smartphone to feature Dolby Atmos technology for rich audio quality.

The A7000 has 5.5-inch 720p IPS display and runs on a 1.5GHz MediaTek octa-core processor. It sports an 8-megapixel autofocus rear camera with LED flash and a 5-megapixel front camera.

The A7000 is 7.9mm thin and weighs 140 grams. It will be available in Onyx Black and Pearl White.Â The smartphone comes with 8GB internal storage with 2GB RAM and has a 2900mAh replaceable battery.