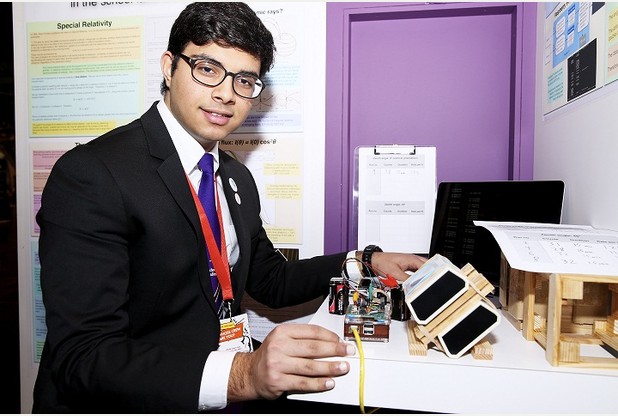 A 15-year-old Indian-origin schoolboy in the UK has been awarded the Institute of Physics Prize for conducting an experiment that verified an effect of Albert Einstein’s theory of special relativity.

Pratap Singh, a student at The Perse School, Cambridge, has won the 500 pounds Institute of Physics (IOP) prize at theÂ  Big Bang Fair held at the National Exhibition Centre in Birmingham in March.

The prize was among several awarded in the finals of the National Science and Engineering Competition at the fair.

More than 200 UK students aged 11-18 competed in the finals, demonstrating their projects to thousands of visitors.

In his experiment, Singh used two Geiger-Muller tubes to detect cosmic-ray muons, which should not reach the Earth in detectable numbers unless time dilation occurs.

He created a mathematical model for their arrival rate with and without time dilation, and using a Raspberry Pi and some statistical analysis, showed that they follow the model predicted by Einstein’s 1905 theory of special relativity. Â

His experiment was compact enough to fit inside a shoebox.

“I am absolutely thrilled to have won the IOP prize,” Singh said.

“I am especially happy that over the course of thisÂ  project I was able to bring together the theory, create aÂ  mathematical model, and using just school physics lab equipment build an apparatus to observe relativistic time dilation,” he said.

The IOP’s head of outreach and engagement, Johanna Kieniewicz, and the IOP’s regional officer for the Midlands, David Wilkinson, jointly judged the prize.

“I’d like to congratulate Pratap Singh on winning theÂ  Institute of Physics prize with his outstanding project. He demonstrated remarkable creativity in his approach to the problem, bringing together theory grounded in robust science with practical ingenuity,” Kieniewicz said.

An article that Singh wrote about his experiment will be published in Physics Education, a journal published by the IOP.