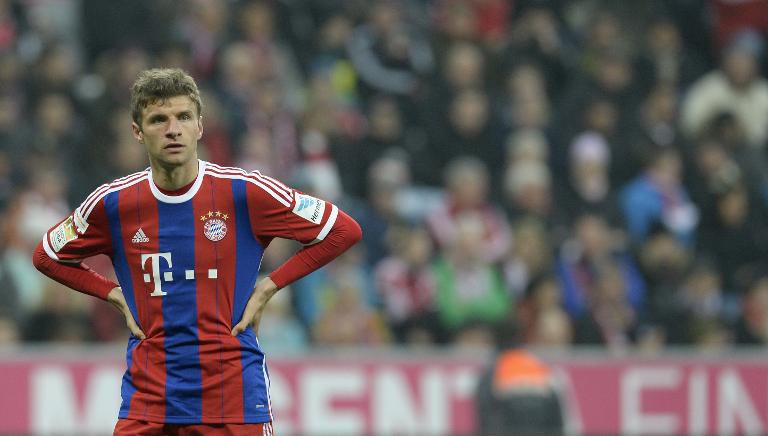 Thomas Mueller says injury-hit holders Bayern Munich must show some ‘balls’ at Bayer Leverkusen on Wednesday for a place in the German Cup’s semi-finals without latest casualty Bastian Schweinsteiger.

With the Munich giants ten points clear in the Bundesliga and fourth-placed Bayer on course for a Champions League place next season, the clash at Leverkusen’s BayArena is the stand-out tie of the quarter-finals.

“You need to have some balls for that, it’s the cup quarter-finals, there is definitely a bit of spice in this one,” said Germany forward Mueller in his own unique style.

Bayern have a lengthy injury list with wingers Arjen Robben and Franck Ribery, plus left-back David Alaba out of the cup quarter-final with long-term ailments.

Defensive midfielder and Germany captain Schweinsteiger is also out after limping off in Saturday’s 1-0 win against Dortmund with an ankle injury.

“He is definitely not going to play,” insisted Bayern coach Pep Guardiola on Tuesday.

Leverkusen will be without South Korea striker Son Heung-Min, who is still suspended after being sent off in their extra-time win over minnows Madgeburg in the second round.

Bayer warmed up with a 4-0 rout of relegation-threatened Hamburg at home last Saturday while Bayern ground out a win in Dortmund with an untypically defensive display.

“The chance to beat Bayern at home is greater than in an away match or in a final,” said Leverkusen’s director of sport Rudi Voeller.

“Bayern are in a different class to Hamburg and we’ll have to put in a sensational performance.”

Bayern remain the team to beat, according to Leverkusen’s former striker Stefan Kiessling, as Leverkusen bid to repeat their 2009 cup quarter-final win over Bayern when Kiessling scored in a 4-2 home win.

– Bayern are team to beat –

Leverkusen went on to lose 1-0 to Werder Bremen in the 2009 final and since then Bayern have won the cup three more times.

They are the record holders by winning the cup 17 times since the competition began in 1953.

“Whoever wants to win the German Cup has to beat Bayern as some point,” said the 31-year-old Kiessling.

“We have them now in the quarter-finals, we had them at home a few years ago at the same stage and we beat them to reach the final.

“We want to win and our goal is to reach the final once more, so that means we’ll give it our all.”

Leverkusen are certainly in line to beat Bayern as both Borusssia Moenchengladbach and Wolfsburg, two of the sides above them in the Bundesliga table, have sprung shock defeats on Munich this season.

The other German Cup quarter-finals are all-Bundesliga affairs as Wolfsburg host Freiburg with Dortmund home to Hoffenheim on Tuesday.

Then third-division Arminia Bielefeld, who have already beaten top-tier sides Hertha Berlin and Werder Bremen in previous rounds, bid to pull off another shock at Moenchengladbach in Wednesday’s other last eight clash.