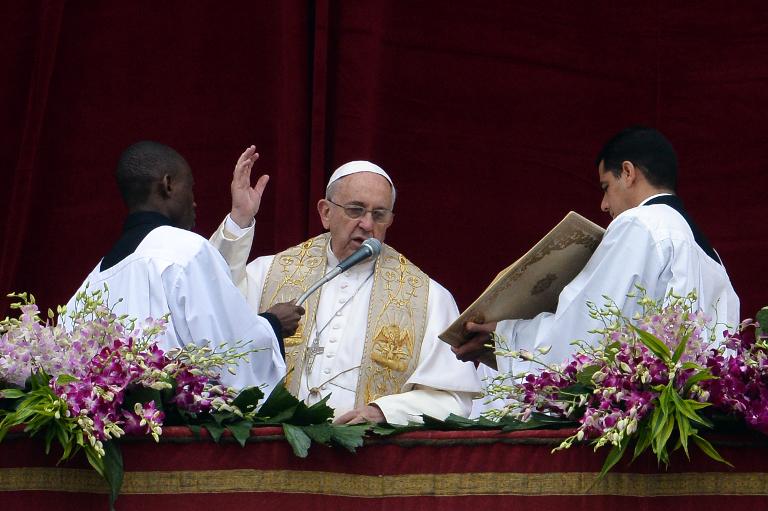 Pope Francis appealed Sunday for an end to “absurd violence” in hotspots around the world and said the international community must not stand by in the face of the “immense humanitarian tragedy” in Syria and Iraq.

In his traditional Easter message, the 78-year-old pontiff said he was praying for those killed in armed conflict, including the students massacred by Somali gunmen at a university in Kenya.

Tens of thousands of pilgrims huddled under a sea of umbrellas in a rain-soaked St Peter’s Square to hear the pope deliver his “Urbi et Orbi” (To the City and World) blessing, broadcast live to dozens of countries.

In his third Easter message since his election as pope in 2013, the head of the world’s 1.2 billion Catholics prayed “for peace, above all, for Syria and Iraq, that the roar of arms may cease”.

He called on the international community to “not stand by before the immense humanitarian tragedy unfolding in these countries and the drama of the numerous refugees” created by the two conflicts.

He also prayed for the victims of Thursday’s attack in Kenya that left 148 people dead, with survivors sayng the militants spared Muslim students but taunted Christian and Jewish students before killing them.

“I think in particular of the young people who were killed last Thursday at Garissa University College in Kenya,” he said.

Earlier Francis greeted pilgrims personally as he rode through the flower-bedecked square aboard his open Popemobile after presiding over Easter mass.

The most important and joyous moment of the Catholic calendar, Easter celebrates the day when Christians believe Jesus rose from the dead.

Speaking from the balcony of St Peter’s Basilica, Francis also said the framework nuclear accord reached Thursday between Iran and six major world powers inspired hope for “a definitive step toward a more secure and fraternal world”.

The Argentine pope pleaded for “absurd bloodshed and all barbarous acts of violence” in Libya to be halted, and voiced his “desire for peace, for the good of the entire people” in war-battered Yemen and Ukraine.

Without referring to a particular hotspot, Francis said: “Those who bear within them God’s power, his love and his justice, do not need to employ violence.”

He prayed for “all who have been kidnapped, and for those forced to abandon their homes and their dear ones” in armed conflict and attacks by extremists in Nigeria and South Sudan as well as parts of Sudan and the Democratic Republic of Congo.

In addition, he urged “peace and freedom for the many men and women subject to old and new forms of enslavement on the part of criminal individuals and groups (and) for the victims of drug dealers… And we ask peace for this world subjected to arms dealers.”

Francis also sounded his trademark appeal to the rich and powerful to care for the world’s poor and downtrodden, saying: “The world proposes that we put ourselves forward at all costs, that we compete.”

Instead, Christians should “seek to live in service to one another, not to be arrogant, but rather respectful and ready to help,” he said.

On Friday he presided over the traditional Via Crucis (Way of the Cross) procession at Rome’s Colosseum evoking the last hours of Jesus’s life.

The day before Francis celebrated two masses — one for priests, and the other at Rome’s Rebibbia prison, where he washed the feet of 10 inmates symbolically evoking Christ’s humility — a theme he took up again on Sunday.

“To enter into the mystery, we need to ‘bend down’, to abase ourselves,” Francis said.