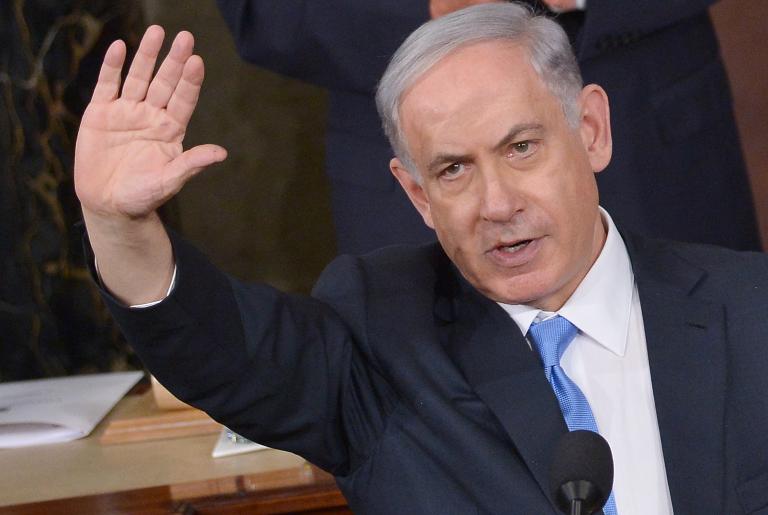 Israeli Prime Minister Benjamin Netanyahu denounced the agreement between Tehran and world powers as a “bad deal,” as Barack Obama affirmed his support for long-time ally Israel despite differences over the nuclear accord.

An outline deal agreed in Switzerland on Thursday paves the way for Tehran to curtail its nuclear activity in exchange for relief from punishing economic sanctions.

“It doesn’t roll back Iran’s nuclear program,” Netanyahu told CNN, one of several US networks he appeared on to slam the deal Sunday.

“It keeps a vast nuclear infrastructure in place. Not a single centrifuge is destroyed. Not a single nuclear facility is shut down, including the underground facilities that they built illicitly. Thousands of centrifuges will keep spinning enriching uranium. That’s a bad deal.”

One part of the complex deal would see Iran slash by more than two-thirds the number of uranium centrifuges — which can make fuel for nuclear power but also the core of a nuclear bomb — to 6,104 from around 19,000 for 10 years.

The United States and Israel have clashed over the deal, with Washington insisting it is the only path toward dismantling Iran’s nuclear program.

Relations between Israel and its traditionally staunch US ally are at a low and were hugely damaged when Netanyahu took the unprecedented step of addressing Congress last month to attack the nuclear negotiations with Iran.

When asked if he trusts President Barack Obama, Netanyahu replied: “I trust that the president is doing what he thinks is good for the United States, but I think that we can have a legitimate difference of opinion on this” because Iran has been shown not to be trustworthy.

But Obama said that the US-Israel bond is “unshakeable,” and affirmed his support for Iran despite disagreements about the Iran nuclear deal.

“Even in the midst of the disagreements that I have had with Prime Minister Netanyahu both on Iran as well as on the Palestinian issue, I have been consistent saying that our defense of Israel is unshakable,” Obama told The New York Times in an interview Saturday that was posted on Sunday.

“I would consider it a failure on my part, a fundamental failure of my presidency, if on my watch or as a consequence of work that I’ve done, Israel was rendered more vulnerable,” Obama said.

Israel’s government reacted angrily to the historic agreement, which aims for a June 30 deadline for a final deal, with Netanyahu demanding that Iranian recognition of the Jewish state’s right to exist be written into the agreement.

“I’ll tell you what else will happen,” he added. “I think it will also spark an arms race with the Sunni states,” a reference to Gulf monarchies.

Saudi Arabia fears that if too much of Iran’s nuclear program is left intact, it will still have the ability to obtain an atomic bomb, and there are concerns that Riyadh could seek its own nuclear capability.

Iran and Saudi Arabia, the foremost Shiite and Sunni Muslim powers in the Middle East, have had troubled relations in recent years after taking different sides in the Syrian civil war.

Netanyahu told ABC News that the money that will flow back into Iran as sanctions ease will not be used to help the population.

“It lifts the sanctions on them fairly quickly and enables them to get billions of dollars into their coffers,” he said.

“They’re not going to use it for schools or hospitals or roads… they’re going to use it to pump up their terror machine worldwide and their military machine that is busy conquering the Middle East now.”

“I wish that he would contain himself because he has put out no real alternative,” Feinstein said.

Ben Rhodes, the US deputy national security adviser for strategic communications, said Netanyahu was wrong because no deal could be reached that involved Iran dismantling its nuclear program.

“Obviously that’s the preferable solution,” Rhodes told CNN. “But the fact is Iran was never going to agree to a deal in which they got rid of their entire nuclear infrastructure.