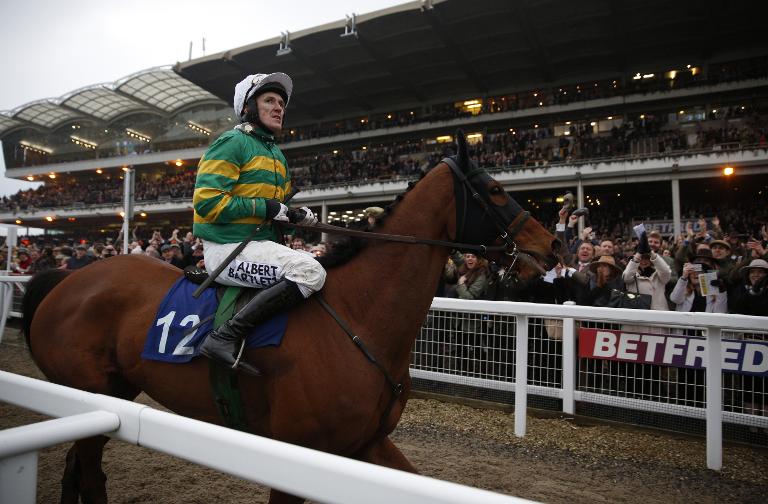 Riding legend Tony McCoy could bring the curtain down on his remarkable career and inscribe another fairytale into the rich history of the Grand National by winning on his expected ride Shutthefrontdoor at Aintree racecourse next Saturday.

If the 40-year-old Northern Irishman — who is already assured of his 20th jockeys’ title — were to prevail on the Jonjo O’Neill-trained 2014 Irish Grand National victor it would also constitute a huge loss for the bookmakers.

Betting industry insiders say a McCoy Aintree win could see the bookies having to pay out Â£30million ($32.6m) with his ride likely to start the shortest favourite for the intimidating 30 fences challenge — not to mention some pretty high class opposition among his 39 rivals — since Red Rum went off at 7/2 in 1975 and finished second to Irish raider L’Escargot.

Indeed if he wins the Irish National on Monday on Cantlow and completes the double on Shutthefrontdoor while it would be a delight for the punters it threatens to be the stuff of nightmares for the bookies.

“Cantlow and Shutthefrontdoor could bookend the most expensive week we have ever known,” said David Williams, spokesman for Ladbrokes.

McCoy, who had a disappointing final Cheltenham Festival missing out on all the biggest prizes, has said that if he wins the Grand National he will immediately call it a day although he is urging caution about his chances.

“I’m not sure he should be such a short price, and it’s a long time since he ran, but something would have to happen for me to switch from him,” said McCoy.

“If I don’t win it (the National), I’ll go on until Sandown. It’s the end of the British season and they have been good enough to name a race (the AP McCoy Celebration Chase) after me.”

O’Neill, who despite being one of the foremost jockeys of his generation, never completed the course in seven rides in the world’s greatest steeplechase, said that Shutthefrontdoor was a different type of horse to their previous winner, McCoy’s only success in the race, Don’t Push It in 2010.

“He’s straightforward unlike Don’t Push It — he was half mad,” said O’Neill, who along with McCoy and owner JP McManus suffered the flip side of the coin in the 2012 race when their Cheltenham Gold Cup winner Synchronised had to be put down.

O’Neill, who as a jockey is best remembered for an emotional win on Irish mare Dawn Run in the 1986 Cheltenham Gold Cup to become the first horse to complete the Champion Hurdle/Gold Cup double, is concerned by the lack of experience of Shutthefrontdoor.

“It would be great to give him (McCoy) a good ride but the National is the National so you can’t be cocky about it,” said O’Neill.

“If we sent him off into retirement on a National winner it would be more than special. It would put the cream and a little cherry on top of the cake.”