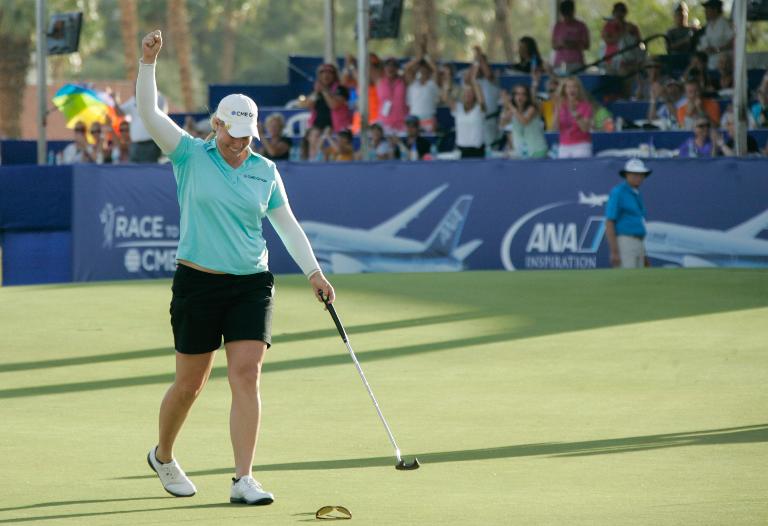 Lincicome hit a brilliant approach shot on the final extra hole then tapped in to take the first major championship of the 2015 LPGA Tour season and snap an almost four-year winless drought.

“Super emotional right now,” Lincicome said. “I am standing here shaking like a leaf. It is over and I am still shaking. It is just how nerves get to you.”

Lincicome also won this event in 2009 for her only other major title. She set the table for both victories by making an eagle on the 72nd hole of the tournaments at the Mission Hills Country Club.

Lincicome shot a three-under 69 in the final round to finish tied with Lewis at nine-under 279.

Lewis made a furious charge of her own coming from behind on the back nine to chase down and surpass third-round leader South Korean rookie Kim Sei-Young. Lewis shot a two-under 70 Sunday.

Morgan Pressel finished solo third at eight-under par while Kim tied for fourth with two others at seven-under, two shots back of the leaders.

Lincicome and Lewis returned to the tee on the par-five 18th for the playoff, not once, but three times.

“Gosh, we played that hole so many times,” said Lincicome, whose last win came at the 2011 Canadian Open. “The first time we played that hole, it was fairly easy, except that I was so far out of this tournament, that I never had a chance.

“So, hitting that five-iron into the hole the first time, was super easy.”

Lewis, who was in the final group, missed a birdie putt to win on the final hole of regulation.

Both missed the fairway with their tee shots on the first playoff hole, and reached the green with their third. Lincicome two-putted for her par, then watched as Lewis’ birdie effort slid by the edge.

It was the same story on the second playoff hole. Both players reached the green in three with Lewis five feet closer and on the same line. Lincicome’s putt narrowly missed on the left edge. Lewis, who won this event four years ago, also just missed her birdie try on the same side.

“It’s getting a little colder and it’s a little bit into the wind out there and the only club I could have hit was three-wood and that was going to go over the green, and my wedges have been so good all week that I was kind of hoping I could wedge it up there close and make the birdie then, but I didn’t,” said the long-hitting Lincicome about why she didn’t go for the green in two on the second extra hole.

The third time around both players laid up with their second shots, but Lewis’ ball landed in a divot. She came up short of the green with her approach then Lincicome dropped her approach inside 10 feet. Lewis then bungled her chip shot.

Lewis missed again as her par effort came up short. Lincicome’s birdie try slid by the edge, but she tapped in for par and the win.

“You know, it starts out as disappointment, but it was just bad luck really. Getting into the middle of a divot there was just a hard lie,” Lewis said of the third playoff hole.

Thailand sisters Moriya and Ariya Jutanugarn were both in the hunt heading into the final round. Moriya closed with a 73 to finish tied for 11th and Ariya tied for 20th with five others.