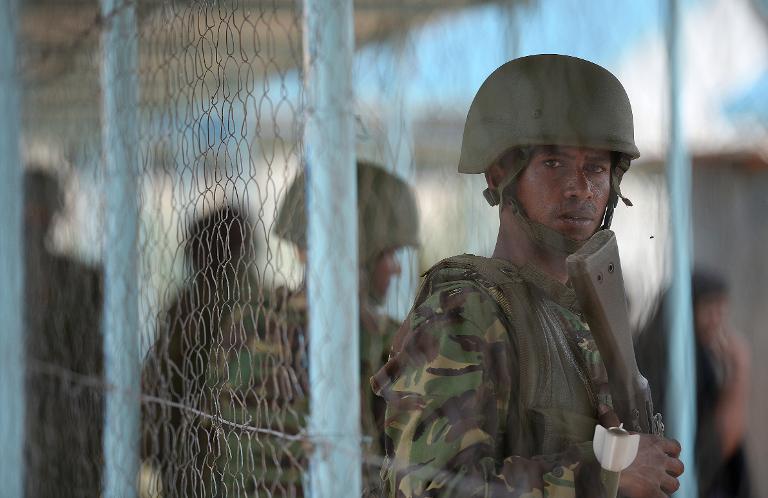 Kenyan fighter jets pounded Al-Qaeda-linked Shebab insurgent camps in southern Somalia on Monday, the army said, days after the Islamists killed 148 people in their worst ever massacre in Kenya.

The airstrikes, which the army said destroyed two Islamist bases, came on the second day of national mourning in Kenya, and as security forces tried to hunt down those behind the university killings.

The massacre, Kenya’s deadliest attack since the 1998 bombing of the US embassy in Nairobi, claimed the lives of 142 students, three police officers and three soldiers.

“The two targets were hit and taken out, the two camps are destroyed,” he added.

The airstrikes followed a promise by President Uhuru Kenyatta that he would retaliate “in the severest way possible” against the Shebab militants for their attack last Thursday.

The Shebab gunmen launched the pre-dawn university attack in Garissa, storming dormitory buildings before lining up non-Muslim students for execution in what Kenyatta described as a “barbaric medieval slaughter.”

Kenyan airplanes have made repeated strikes in southern Somalia since their troops crossed into their war-torn neighbour in 2011 to attack Shebab bases, with Nairobi later joining the African Union force fighting the Islamists.

“The bombings are part of the continued process and engagement against Al-Shebab, which will go on,” Obonyo added.

The Shebab fled their power base in Somalia’s capital Mogadishu in 2011, and continue to battle the AU force, AMISOM, sent to drive them out. It includes troops from Burundi, Djibouti, Ethiopia, Kenya and Uganda.

On Saturday, Shebab warned of “another bloodbath” unless Kenya withdraws its troops from Somalia, and threatened a “long, gruesome war”

Five men have been arrested in connection with the university attack, including three alleged “coordinators” captured as they fled towards Somalia, and two others seized in the university compound.

The two arrested on campus included a security guard and a Tanzanian found “hiding in the ceiling” and holding grenades, the interior ministry said.

A $215,000 (200,000 euro) bounty has also been offered for alleged Shebab commander Mohamed Mohamud, a former Kenyan teacher said to be the mastermind behind the attack – and believed to now be in Somalia.

Authorities on Sunday named one of the four gunmen killed as a fellow Kenyan, highlighting the Shebab’s ability to recruit within the country.

Interior ministry spokesman Mwenda Njoka said high-flying Abdirahim Abdullahi, an ethnic Somali, was a university law graduate described by those who knew him as an A-grade student and “a brilliant upcoming lawyer”.

The spokesman said Abdullahi’s father, a local official in the northeastern county of Mandera, had “reported to the authorities that his son had gone missing and suspected the boy had gone to Somalia”.

Although Kenyatta has vowed to retaliate for the massacre, there have also been calls for national unity.

In an address to the nation on Saturday, Kenyatta said people’s “justified anger” should not lead to “the victimisation of anyone” — a clear reference to Kenya’s large Muslim and Somali minorities in a country where 80 percent of the population is Christian.

Forensic investigators aided by foreign experts continued to scour the site, where an AFP reporter on Monday was among the first journalists to enter since the attack, describing bullet-scarred buildings, blood stains on the floors, and an abattoir-like stench across the campus.

Scores of family members of those killed continue an agonising wait for the remains of their loved ones at the main mortuary in Nairobi.

There has been growing criticism in the media that critical intelligence warnings were missed, and that special forces units took seven hours to reach the university, some 365 kilometres (225 miles) from the capital.

But security forces have defended their response.

Foreign Minister Amina Mohamed told AFP that “fighting terrorism… is like being a goalkeeper. You have 100 saves, and nobody remembers them. They remember that one that went past you.”