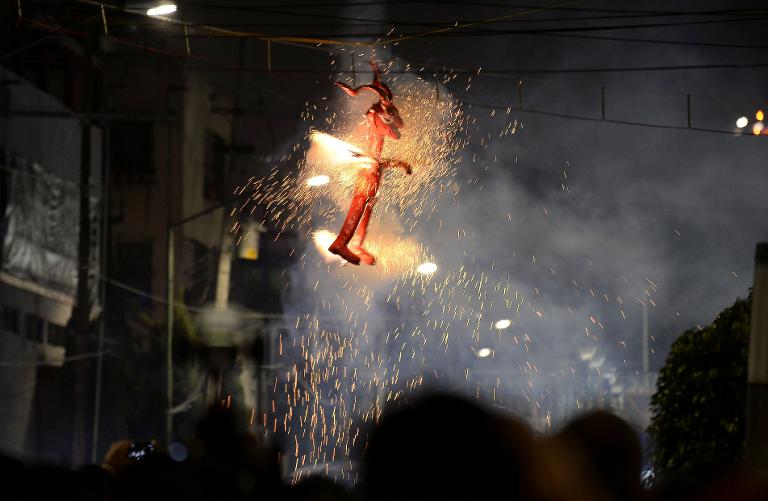 During Holy Week in Mexico there are always processions and prayers, traditionally observed by worshipers across the country. But lesser-known traditions also persist, such as burning Judas figures as a means of overcoming evil.

Judas, the apostle who betrayed Jesus, gets what’s coming to him in this bit of faith-inspired Easter street theater: giant papier mache Judas figures — they can cost as much as $4,000 to make — are hung over crowds who light giant sparklers that hiss and crackle as the bad guy goes down in flames.

“This has been handed down from generation to generation,” said Leonardo Linares at the capital’s Sonora marketplace, among a clutch of Judas figures getting ready to be torched.

“This really is where you learn tradition, we have kept it up all this time because we have seen everything that this art has brought, felt it being handed from parents to children.”

One quirky Mexican twist: what started as a symbol of rage against a biblical traitor has expanded to the political realm.

Anybody who is particularly unpopular could be in line, such as President Enrique Pena Nieto. A figure in his likeness disappeared into flames before cheering crowds at this weekend’s Easter celebrations.

“If people don’t like them, if they did something wrong, they’ll be here,” said Leonardo’s son, Luis Pablo Linares, warning that it’s open season for anyone deemed roast-worthy. The 24-year-old has been making Judas figures for sacrifice his whole life.

Pena Nieto has come under fire over his wife’s purchase of a mansion from a government contractor. His finance minister also bought a house from the same contractor, which has won lucrative government projects. Others have criticized his response in the case of 43 missing students in Iguala presumed dead.

Though Pena Nieto’s followers might not approve of his Judas-style torching at this Easter tradition, his detractors consider it a healthy way to vent frustrations.

In Venezuela, meanwhile, similar anger was on show as President Nicolas Maduro and US President Barack Obama made this year’s cut as Judases worthy of a burning.

The towering figures made of cloth, cardboard and old clothes were labeled traitors by revellers.

“You burn a traitor. And we decided in this case to burn Obama for his infamous decree against our sovereignty and freedom,” said housewife Gladys Bolivar, 63.

The US president on March 9 called Venezuela’s political situation an extraordinary threat to US security.

Maduro has said the animosity is a sign the United States wants to invade to get control of the world’s largest proven crude oil reserves.

The Venezuelan president, also torched, is facing rock-bottom approval ratings as the country’s mostly state-run economy continues to tank. Shortages are common, and inflation is the region’s highest.