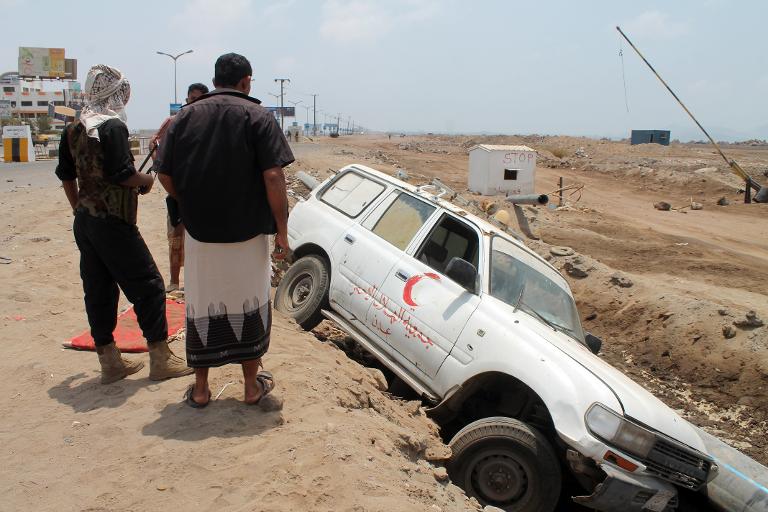 Yemeni rebels made new gains in the battleground southern city Aden Sunday as a Saudi-led coalition trying to halt their advance faced growing calls for a humanitarian pause in air strikes.

The Red Cross has appealed for an immediate truce to allow families to seek water, food and medical assistance, describing the situation as “dire”.

Russia presented a draft resolution to the UN Security Council on Saturday calling for a humanitarian pause in the Saudi-led air war against the Huthi Shiite rebels, now in its 11th day.

The coalition kept up its night-time raids against rebel positions and arms depots, particularly around the capital Sanaa and Saada, the northern stronghold of the Iran-backed rebels.

In the main southern city Aden, the rebels advanced into the central port district of Mualla, capturing the provincial government headquarters, a local official said.

Mualla is defended by “popular committees” militiamen loyal to President Abedrabbo Mansour Hadi, who has fled to neighbouring Saudi Arabia.

At least five civilians were killed and 14 wounded in the latest clashes, according to the city’s health department director Al-Kheder Lassouar.

“There are children among the wounded,” he said.

Residents said dozens of families had fled their homes in Aden, the heart of which sits on an extinct volcano jutting out into the sea.

Assiri also said that the Red Cross had been due to send a plane Sunday to Sanaa carrying humanitarian aid but had delayed the flight.

The rebels also fired mortar rounds at an Aden television station loyal to Hadi, forcing it off the air.

Hospitals are running short of medicines and the streets of Aden are strewn with bodies, the Red Cross said, calling for a 24-hour ceasefire.

“Our relief supplies and surgical personnel must be allowed to enter the country and safely reach the worst-affected places to provide help,” said Robert Mardin, head of Middle East operations for the International Committee of the Red Cross.

“Otherwise, put starkly, many more people will die. For the wounded, their chances of survival depend on action within hours, not days.”

The Saudi-led military coalition, which comprises four other Gulf states as well as Egypt, Jordan, Morocco and Sudan, said aid would be allowed into the country when conditions are right.

Violence has escalated sharply in the deeply tribal country on the southern tip of the Arabian Peninsula since the coalition launched Operation Decisive Storm against the rebels on March 26.

Hadi took refuge in Aden in February after the Huthis seized power in the capital Sanaa, but left for Saudi Arabia last month as they advanced on the city.

The rebels seized his presidential palace in Aden on Thursday but, aided by air strikes and arms drops, Hadi loyalists drove the rebels out of the hilltop complex the following day.

The violence has raised fears that impoverished Yemen could be torn apart by a proxy war between Saudi Arabia and Iran — the foremost Sunni and Shiite Muslim powers in the Middle East.

Iran has accused Sunni-ruled Saudi Arabia of sowing instability in the region with its air campaign against the Huthis, who hail from the mainly Shiite northern mountains.

But Tehran has rejected as “utter lies” accusations that it armed the rebels, who have allied with army units loyal to ex-president Ali Abdullah Saleh to seize vast swathes of Yemen.

Iranian media reported Sunday that Tehran had sought help from Oman, which unlike other Gulf monarchies did not participate in the Saudi-led coalition, to end the air strikes “immediately”.

Separated from Iran by only the narrow Strait of Hormuz, Oman enjoys much better ties with the Islamic republic than other Gulf Arab states.

Russia’s request to halt the air strikes came as Gulf countries were pushing for a separate UN resolution that would impose an arms embargo and sanctions on the Huthis.

That draft text has come up against strong opposition from Moscow, which proposed amendments to apply the arms embargo to the entire country and to limit sanctions.