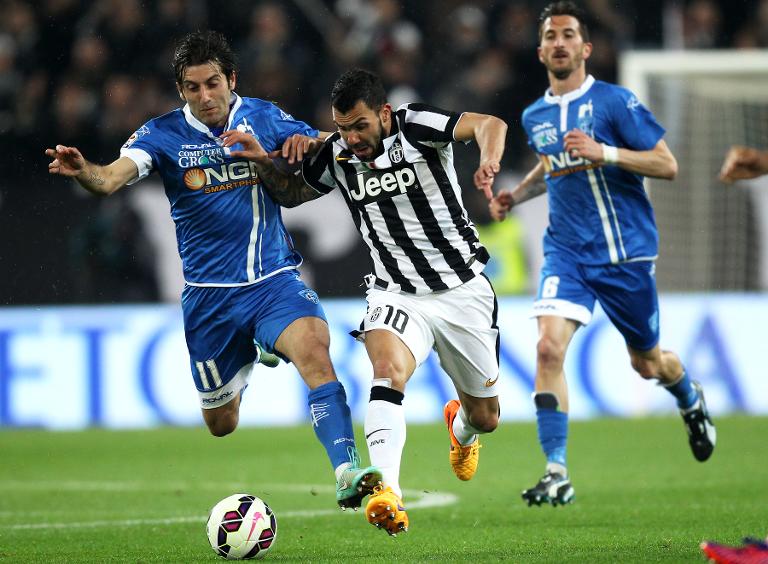 Carlos Tevez hit his 17th goal of the campaign and Roberto Pereyra added a late second as Juventus beat Empoli 2-0 in Turin on Saturday to restore their 14-point lead on Roma.

Roma had earlier ended a four-month wait for victory at the Stadio Olimpico when Miralem Pjanic struck in the 25th minute to seal a 1-0 win for Rudi Garcia’s men over Napoli.

But Juve’s 21st win of the season restored their sizeable advantage and underlined their status as champions in waiting.

Tevez gave Juve a controversial lead two minutes from the interval when he smashed a free kick past Luigi Sepe after an Empoli player was ruled to have given a backpass to the ‘keeper.

Massimiliano Allegri’s side were in little danger for the remainder but wrapped up the points in extra-time when Pereyra smashed home the rebound from a Tevez strike.

Tevez now leads Serie A on goals with 17 so far, one more than Frenchman Jeremy Menez who pulled level with the Argentinian when he hit the winner for AC Milan in a 2-1 win at Palermo.

However the Argentinian said there will be no let up, telling Sky Sport: “Roma are still alive, we saw that before kick-off. We’re not mathematically safe, so we have to keep winning.”

But with only nine game remaining, the focus is more on the teams behind Juventus who are battling for Europe.

Earlier, Roma’s joy was tempered when Lazio made it seven on the trot with a 3-1 away win at Cagliari.

Lazio broke the deadlock on the half hour after some great work by Felipe Anderson allowed an unmarked Miroslav Klose to tap in at the back post.

And although Cagliari pulled level after the restart thanks to Marco Sau’s deflected half-volley, Lazio struck back through a Lucas Biglia penalty and then Marco Parolo’s piledriver of a free kick in extra-time.

Lazio coach Stefano Pioli affirmed: “Today we showed great character and fight against a team that made life difficult for us.

“We’ll try to win every game left this season. At the end, we’ll look at how we’ve fared.”

Fiorentina leapt up to fourth thanks to a precious 2-0 win over Sampdoria in a rain-hit encounter in Florence, where Alessandro Diamanti and Mohamed Salah, with a superb individual effort, striking in three, second-half minutes.

Fiorentina are still six points behind Lazio in third, but moved up to fourth to sit one point ahead of Sampdoria and two ahead of stuttering Napoli.

Spanish midfielder Borja Valero admitted that chasing a third-place finish is not beyond Fiorentina: “We have to believe in it.”

He added: “Today was a crucial win for us because they (Samp) have been playing really well and the pitch was terrible to play on. We played the perfect game.”

Milan’s 2-1 win at Palermo kept them in eighth but Filippo Inzaghi’s men are now six points off fifth-placed Napoli in the second and last league spot for the Europa League.

It was Milan’s second successive win but their first away since beating Verona 3-1 in October.

Inter sit in 10th place, three points behind Milan, a setback that was enough to see management cancel the Easter holiday on Sunday.

Cesena, meanwhile, boosted their bid to stave off relegation by securing a point in a stunning 3-3 draw at Verona after the hosts had raced to a three-goal lead thanks to in part to a Luca Toni brace which took his tally for the season to 15.

Carlos Carbonero, on 70 minutes, Franco Brienza and then Davide Succi struck in the closing minutes to stun the hosts.