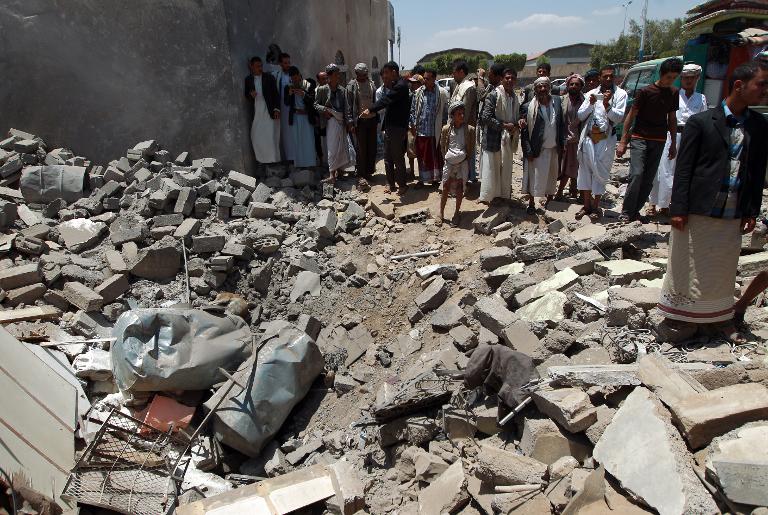 Russia called on the UN Security Council to push for a pause in the air war in Yemen, as a Saudi-led coalition pounded rebels in the country for a 10th day.

Yemen’s main southern city, a last foothold of supporters of self-exiled President Abedrabbo Mansour Hadi, has been shaken by more than a week of clashes between Shiite Huthi rebels and loyalist militia.

A military source said at least 13 rebel fighters were killed.

For a second night, the coalition airdropped weapons and ammunition to supporters of Hadi, who fled to Saudi Arabia last month as the Iran-backed Huthis approached Aden.

“We thank the kingdom of Saudi Arabia and all the Gulf countries, as well as our brothers in Arab countries, for dropping supplies,” said Ahmad Qassem al-Shaawi, a local militia chief.

“God willing, we will be victorious and bravely carry on fighting as heroes, and fight off any attack.”

Russia, meanwhile, presented a draft resolution to the UN Security Council calling for a humanitarian pause in the air campaign to allow for the evacuation of foreigners, diplomats said.

The measure would demand “regular and obligatory humanitarian pauses in the air strikes… to allow all concerned states and international organisations to evacuate their citizens and personnel from Yemen,” the draft text said.

Russian Deputy Ambassador Vladimir Safronkov told reporters the pause would ensure that “when we evacuate people, to make sure it’s secure and safe.”

Aided by the strikes and arms drops, Hadi loyalists have managed to drive the rebels back from some parts of central Aden.

At least 185 dead and 1,282 wounded have been counted in hospitals in Aden since March 26, the city’s health department director Al-Kheder Lassouar said.

The toll does not include casualties among the rebels and their allies, who do not take their people to public hospitals, or victims of air raids, he said.

The coalition says it has no plans for now to deploy ground forces in Yemen.

But Saudi Arabia’s army and naval special forces have carried out specific operations, a Saudi adviser said, without revealing if they had actually set foot on the ground.

Egypt’s President Abdel Fattah al-Sisi, whose country is participating in the coalition, said securing the Bab al-Mandab access to the Red Sea off Yemen’s coast is a top priority.

And the Saudi adviser said special forces were also involved in operations against Huthi units on Myun Island in the strait, through which much of the world’s maritime trade passes.

Medics called on international organisations and Arab states participating in the coalition to provide emergency medical assistance to hospitals in Aden.

“Medicine stocks are exhausted and hospitals can no longer cope with the increasing number of victims,” Lassouar said.

Yemen, an impoverished state on the southern tip of the Arabian Peninsula, is the scene of the latest proxy struggle playing out between Middle East powers, after Syria and Iraq.

Iran has accused Sunni-ruled Saudi Arabia of sowing instability in the region.

But it has rejected as “utter lies” accusations that it armed the rebels, who have allied with army units loyal to former president Ali Abdullah Saleh.

The Red Cross said hospitals in Aden were overwhelmed by the casualties and fighting was making it nearly impossible for aid workers to move around.

Two brothers working for the Yemen Red Crescent Society were shot dead Friday in the southern city while evacuating the wounded, it said.

“In Yemen, we are seeing Red Crescent volunteers being deliberately killed as they strive to save others. This is the third senseless death in a single week. This is a very worrying trend and a tragic loss,” said Robert Mardini of the International Committee of the Red Cross.

Meanwhile on Saturday Algeria evacuated 160 of its citizens along with 40 Tunisians, 15 Mauritians, eight Libyans, three Moroccans and a Palestinian from Sanaa on a flight to Cairo, Algerian national news agency APS reported.

The military coalition said China, Djibouti, Egypt and Sudan, along with two aid groups, were also scheduled to carry out evacuations from Sunday while requests from others including Canada, Germany and Iraq were being processed.

The turmoil has allowed Al-Qaeda to expand its foothold in the southeast of the deeply tribal country, which had been a key US ally in the war on the extremist network.

On Friday, Al-Qaeda fighters captured the regional army headquarters in Mukalla, capital of the southeastern province of Hadramawt.

They now control nearly all of the city, where they stormed a jail and freed 300 inmates on Thursday.

In the southern town of Daleh, the rebels broke into a jail and freed more than 500 prisoners, according to a military source, who voiced fears of “widespread anarchy” engulfing the country.