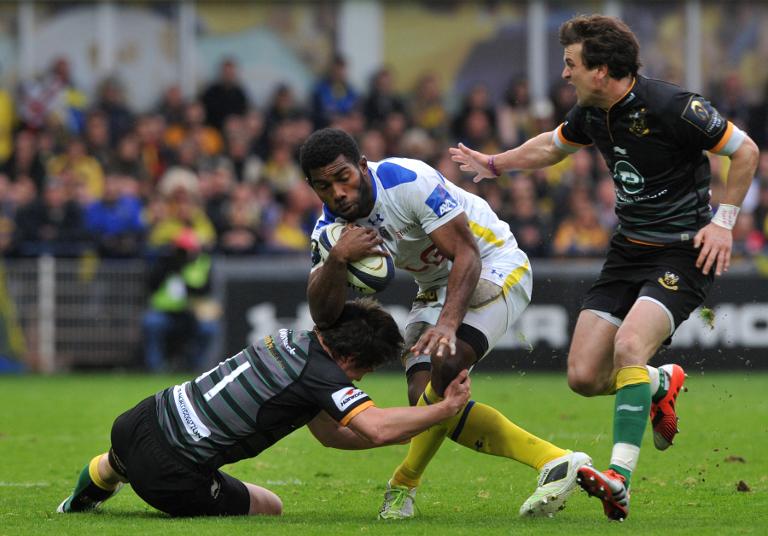 Three-time champions Leinster and French giants Clermont advanced into the last four of the European Champions Cup after beating English duo Bath and Northampton in the quarter-finals on Saturday.

Leinster will be rewarded with a semi-final trip to defending champions Toulon or Wasps, while Clermont will host Racing Metro or Saracens, with the last-four showdown scheduled for April 18-19.

In France, Northampton were put firmly in their place by Clermont, locked atop the Top 14 with Toulon.

“In all fairness everything worked for us in the first half,” said Clermont hooker Benjamin Kayser.

“It was a great performance and great preparation, we’re happy to be in the semi-finals.”

Northampton skipper Dylan Hartley was blunt in his assessment.

“We got caught cold, and the blue-and-gold steamroller went and kept going,” Hartley told Sky Sports.

“We didn’t get a foothold in the game at any stage… They’re a hell of a team.”

Nakaitaci showed exceptional strength to burrow over for his first try, the winger then doubling up after James played the ball wide after a scintillating Wesley Fofana break.

Fofana was on hand to round off another stunning break by full-back Abendanon, with the experienced Clermont backrow of Damien Chouly, Fritz Lee and Julien Bonnaire completely outplaying their Saints counterparts.

James added a third penalty early in the second period, but it was Northampton who camped out in Clermont territory as they upped the ante.

However, the outstanding Abendanon was on hand to strip George Pisi of the ball and the twice-capped England international streaked away 90 metres for a try James converted.

In Dublin, Madigan landed six penalties to guide Leinster past a misfiring Bath at Lansdowne Road.

But for Madigan the hosts would have been in serious trouble as Bath scored two superb tries, England fly-half George Ford scoring the first and then his break and offload setting up the second for Stuart Hooper.

However, the visitors had only themselves to blame with 16 handling errors and conceding 12 penalties, including one in the dying seconds when inside the hosts’ 22.

“This win means everything to us,” Madigan told BT Sport.

“Our season rode on this game. Bath are a really good side with internationals littered through it.

Bath scored the only try of the first-half, Ford bursting through a gap between Devin Toner and Jordi Murphy and running in from outside the Leinster 22. However the England fly-half was unable to convert, the ball coming back off a post.

Leinster, though, finished the first-half in command as five excellently executed penalties by Madigan saw them go in 15-5 up, the host team’s cause helped by a yellow card for Anthony Watson for taking out Rob Kearney in midair.

However, despite early Leinster pressure it was Ford who engineered the visitors’ second try as he once again worked his way through a gap between the lumbering Toner and Cian Healy.

He was unable to get to the tryline but produced a glorious offload to captain Hooper, who touched down for a try Ford converted to leave the English side just three points adrift at 15-12.

Madigan, though, punished Bath indiscipline once again in the 52nd minute, striking a superb penalty for 18-12. Ford dragged one back but the Irish province held on for the win.