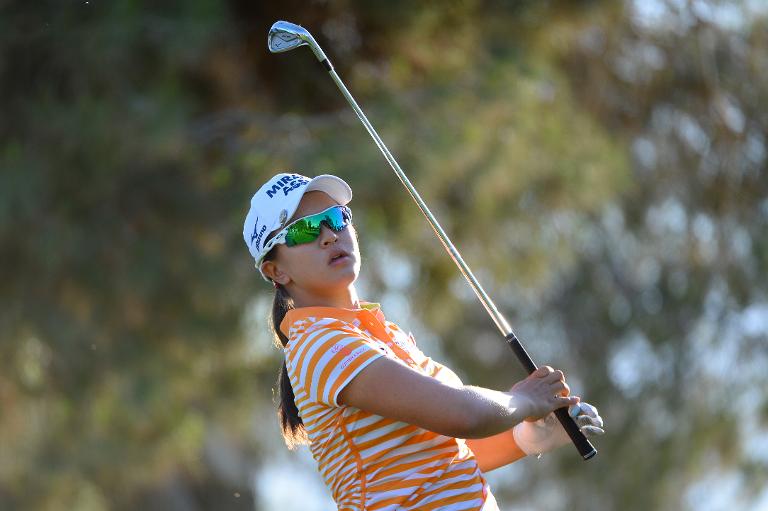 Kim fired a three-under 69 to finish 54 holes with a 10-under 206 in the first major championship of the season. American Stacy Lewis (68) is second while Thailand’s Ariya Jutanugarn and former winners Morgan Pressel and Brittany Lincicome are tied for third at six-under par.

Ariya’s older sister Moriya shot her second straight 70 and is tied with China’s Feng Shan-Shan and South Korea’s Jenny Shin for third at five-under, five shots back of Kim.

Kim is seeking her second career victory on the LPGA Tour and her first major title. Her first win came at the second event of this season, the Pure Silk Bahamas Classic, in February.

She finished her third round with birdies on number 16 and 17 and a par on 18.

“If I were to win it tomorrow it would be the biggest dream ever to come true for me,” Kim said.

“I definitely want to get my hand on it and for sure it won’t be bad jumping into that pond tomorrow,” she said of the Sunday tradition where the winner leaps into Poppie’s Pond.

Lewis, a two-time major champion and winner of this event back in 2011, held the lead late in her round, but she stumbled to the finish with two bogeys in her final four holes. Lewis is alone in second at a seven-under 209.

“I didn’t make the best swings ever,” Lewis said of her frustrating finish.

The 19-year-old Ariya, who is enjoying a superb first season as a full-time player on the Tour, had the low round of the day with a six-under 66. Her bogey-free round comprised six birdies and 12 pars on the Mission Hills Country Club course.

Ariya said she is playing with a lot of confidence.

“Even on the first hole I missed my tee shot and I still made birdie,” Ariya said. “After that I still had some birdies. I have the strength to go for par fives.

“My putting is good. Everything is pretty good. It is really exciting.”

She said having her sister near the top of the leaderboard with her is an added bonus.

“It is very nice,” Ariya said. “Yesterday I shot one-over and I was complaining about everything. She told me, ‘keep focused, be patient’ and that helped me a lot.”

In 2013, Ariya had shoulder surgery which was followed by six months of rehabilitation.

That same year, Moriya was named the Tour’s Rolex Rookie of the Year.

Defending champion Lexi Thompson, of the US, managed to shoot a one-under 71 and is tied for ninth at four under.