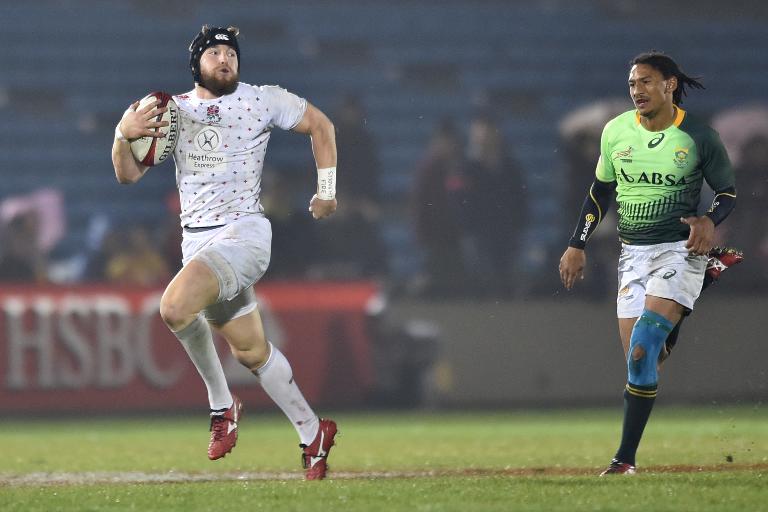 England floored South Africa 21-14 in a battle of attrition to win the Tokyo Sevens on Sunday and take a significant step towards qualifying for the 2016 Rio Olympics.

Forward Phil Burgess charged the length of the field to give England a 14-point cushion in an absorbing final before a late surge from the Blitzboks came up just short in the pouring rain.

England’s first sevens title in two years lifted them above Australia into fourth place in the standings, with only the Glasgow and London legs of the nine-stage tour remaining.

The top four teams in the Sevens World Series automatically qualify for Brazil, where the sport will make its Olympic debut.

South Africa lead the standings with 129 points, ahead of Fiji on 125 and New Zealand, who have 120 points. England improved to 100 with Australia on 91 after their weekend fell flat.

“Luckily I had enough in the tank left,” said Burgess after his lung-bursting breakaway proved the difference. “When I looked around there was nobody with me so I had to get my head down. We caught them a little off guard.”

Fiji had to settle for third place as their bid for a hat-trick of victories fell short following success in Hong Kong last week and in Las Vegas in February.

The Pacific islanders squeaked past a fired-up Canada 21-19 in a nail-biter after the Canadians had produced the shock of the weekend by dumping out New Zealand in a stunning 19-15 quarter-final win.

However, Canada’s dream run — bravely led by inspirational captain John Moonlight — was ended by England 14-5 in the semi-finals.

The All Blacks had to console themselves by winning the Plate after a 21-14 victory over Scotland, substitute Dylan Collier crashing over at the buzzer.

“It’s not the trophy we wanted,” snapped New Zealand skipper D.J. Forbes. “You got that right.”

England showed true grit in the grand finale, Charlie Hayter racing over for a converted try before Justin Geduld latched on to a clever chip-through to level, leaving the game on a knife edge at halftime.

England skipper Tom Mitchell scored seconds after the restart before Burgess’s herculean sprint from under his own posts gave the side breathing space. A Cecil Afrika try made for a nervy finish but England managed to hang on.

“It’s been a huge effort,” said Mitchell, who had come up big in England’s 10-0 win over France in the quarter-finals. “South Africa are an unbelievable team, we were always going to have to fight to the death.”

Australia’s miserable weekend was completed in the Bowl final when Perry Baker crashed down in the corner to give the United States a thrilling 17-12 extra-time victory.

Japan’s fairy tale was snuffed out by Fiji, who battered the hosts 41-5 thanks to four tries from Josaia Raisuqe. But the Brave Blossoms collected a priceless 10 points in their battle to avoid dropping out of the top-15 “core” teams.

Portugal upset Argentina to win the Shield final 12-7 as their relegation dogfight with Japan looks set to go down to the wire, their points advantage cut to just eight.