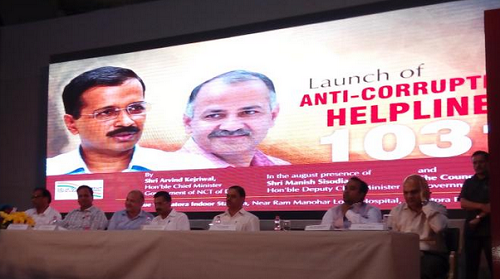 The service can be used by people to lodge complaints if they are harassed for bribes by a government official.

The helpline number 1031, which could cater to only 25% calls due to a shortage of lines, has undergone a makeover and can now attend 10,000 calls per day against 1,000 last time.

Executives have been trained to attend calls and direct the caller on how to conduct sting operations. After receiving the call, an executive will categorised the call in two parts – serious and non-serious.Â

â€œThe serious calls will further be categorised according to callers agreeing to conduct sting operations and as per departments where raids need to be conducted. The details will then be transferred to the anti-corruption branch, which will initiate action,â€ said a senior Delhi government official, requesting anonymity.

The faces operating the helpline will be kept a secret and the operators will call back residents duly to ascertain details of their planned operation.

Â â€œCallers will be subsequently coached on how to trap those asking for a bribe. The people who advise them are part of a separate cell and are trained in sting operations,â€ the official added.

Since, conducting sting is not only about recording but also requires behavioral training, the experts are expected to spend a lot of time with a caller.

â€œIf a person is hesitant in conducting the sting operation, our staff will do it on their behalf. We have enough man power and technical equipment to do so,â€ he further said.

A dedicated helpline for reporting cases of corruption was one of the major promises made by AAP in its manifesto for the Assembly elections this year.

There will be 40 teams who will take part in investigations and raid.