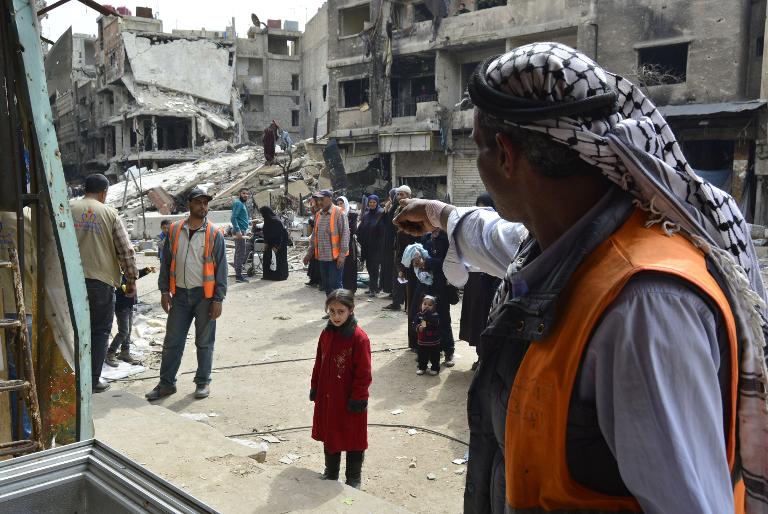 Around 2,000 people have been evacuated from the Yarmuk Palestinian refugee camp in Damascus after the Islamic State group seized large parts of it, a Palestinian official told AFP Sunday.

“Around 400 families, approximately 2,000 people, were able to leave the camp on Friday and Saturday via two secure roads to the Zahira district, which is under army control,” said Anwar Abdul Hadi, a Palestine Liberation Organisation official.

“The evacuations are continuing on Sunday and some people are now in Yalda (a district under regime control) and waiting to be taken to shelters.”

State news agency SANA also reported the evacuations, saying they were carried out in coordination between the army and Palestinian factions and that the government had set up shelters for those fleeing.

Palestinian forces inside Yarmuk are largely surrounded by IS fighters who have captured large swathes of the camp since an assault that began Wednesday.

Abdul Hadi said most of those evacuated from the camp were being hosted in government shelters, with at least 25 wounded taken to hospital.

The Syrian Observatory for Human Rights, a Britain-based monitoring group, confirmed that “hundreds” of people had been evacuated from the camp.

It said at least 26 people, including civilians as well as fighters from IS and Palestinian factions, had been killed in the camp since Wednesday.

The UN agency for Palestinian refugees UNRWA said it had on Sunday given “life-saving humanitarian support to 94 civilians, including 43 women and 20 children, who fled Yarmuk.”

UNRWA spokesman Chris Gunness urged the warring parties to “show maximum restraint so other civilians who wish to leave can be evacuated.”

Since the jihadist advance began Wednesday, regime forces have pounded the camp with shells and barrel bombs, according to the Observatory.

Palestinian officials have urged humanitarian access to the camp and called for its residents to be protected.

“The Palestinians are paying the price for wars and violence that are not of their making,” Palestinian president Mahmud Abbas said in a speech Sunday.

He said a solution must be found “to protect the residents of Yarmuk who have done nothing to deserve this.”

His comments came as some 100 protesters gathered in Ramallah, on the West Bank, in a show of solidarity with their fellow Palestinians in the camp.

Yarmuk, in south Damascus, was once home to 160,000 people, Syrians as well as Palestinians but its population has dwindled to just 18,000 since the uprising erupted in March 2011.

The camp is encircled by government forces and was under a tight siege for more than a year.

An agreement last year between rebels and the government, backed by Palestinian factions, led to an easing of the siege, but humanitarian access has remained limited.

Syrian troops remain outside the camp and have set up new checkpoints around Yarmuk, sources said.

Palestinian officials have accused Al-Qaeda’s Syrian affiliate Al-Nusra Front of helping IS to enter the camp.

Among the deaths in the fighting were at least two Palestinian militants reportedly beheaded by IS, said the Observatory and jihadist social media accounts.

Elsewhere in the country, the Observatory and Assyrian activists said IS fighters had blown up a church in the northeastern province of Hasakeh.

The Assyrian Network for Human Rights said the Virgin March church in the village of Tal Nasri was blown up after Kurdish and Assyrian forces attempted to enter the area.

In February, IS forces seized 14 majority Assyrian Christian villages along the Khabur river in Hasakeh, and kidnapped at least 220 Assyrians.