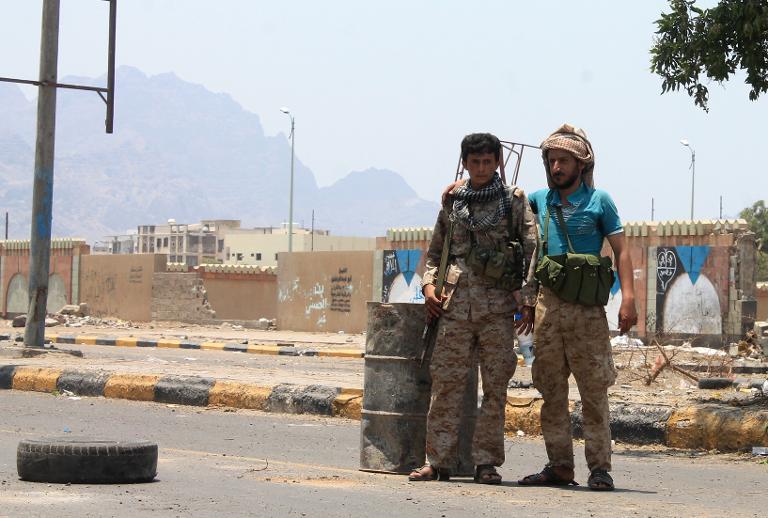 Saudi-led air raids drove back rebels in the last stronghold of Yemen’s absent president Friday, while Al-Qaeda militants seized a major army base in the southeast.

The impoverished Arabian Peninsula state has sunk further into chaos since the coalition spearheaded by Riyadh launched Operation Decisive Storm on March 26 to try to halt the advance by Shiite Huthi rebels.

The turmoil has raised fears that Al-Qaeda will expand its foothold in the deeply tribal country, which borders oil-rich Saudi Arabia and lies near key shipping routes.

On Friday the Sunni extremists captured unopposed the regional army headquarters in Mukalla, capital of the southeastern province of Hadramawt, a military official said.

They now control nearly all of the city, where they stormed a jail and freed 300 inmates a day earlier.

UN aid chief Valerie Amos said Thursday that 519 people had been killed and nearly 1,700 wounded in two weeks of fighting, adding that she was “extremely concerned” for the safety of trapped civilians.

The conflict has sent tensions soaring between Iran and Saudi Arabia, the foremost Shiite and Sunni Muslim powers in the Middle East.

Iran has angrily rejected accusations of arming the rebels, who have allied with military units loyal to former president Ali Abdullah Saleh to seize large parts of Yemen, including the capital Sanaa.

They had captured the hilltop complex a day earlier in a symbolic blow to Hadi, who had already fled to Saudi Arabia.

“The Huthi militia and their allies withdrew before dawn from the Al-Maashiq palace,” said the official in Aden.

The rebels retreated to the nearby central district of Khor Maksar, where 12 rebels were reported killed by pro-Hadi militiamen overnight.

Assiri said the campaign was only in its ninth day.

“We should not be in a rush,” he said. “The campaign is achieving its goals, and you can see that every day.”

Late Friday, two Saudi border guards in the Asir region were shot dead by gunfire from within Yemen, adding to one fatality in a similar incident in the same area a day earlier, the interior ministry said.

In Mukalla, several hundred Al-Qaeda militants flying the black banner of the extremist network were seen patrolling and setting up roadblocks.

Members of Al-Qaeda in the Arabian Peninsula (AQAP) launched calls from mosques in the city for “jihad against Shiites”, residents said.

“Yemen is gradually drifting towards a civil war of a confessional nature”, which “recalls the early days of the Syrian and Iraqi crises”, said Mathieu Guidere, professor at France’s University of Toulouse.

Before the latest chaos, Yemen had been a key US ally in the fight against Al-Qaeda, allowing Washington to carry out drone attacks on its territory.

The government’s collapse forced the United States to close its embassy and withdraw US special operations forces that were helping Yemeni forces battle AQAP.

As a result of the US pullout, “our capability is diminished” against AQAP, a senior military official in Washington said Thursday.

As part of its logistical support for the Saudi-led campaign, the United States will provide aerial refuelling, the official said.

The United States was also delivering intelligence from surveillance satellites and aircraft to help the Saudis monitor their border and to track rebels as they push south, the official added.

The intelligence was helping create “a battlefield picture” of where the Huthis were deployed and to enable coalition aircraft to avoid causing civilian casualties, the official said.

New clashes were reported Friday in areas near the Aden palace and the city’s international airport, which was bombarded overnight by coalition warships, according to military sources.

They said a plane parked at the airport was destroyed.

Meanwhile, China said it had evacuated from Yemen 225 people from 10 different countries aboard a missile frigate, an unprecedented move that underscores its growing global reach.

Cairo also said Friday it had evacuated 35 Egyptians in the first such operation since the Saudi-led operation began.