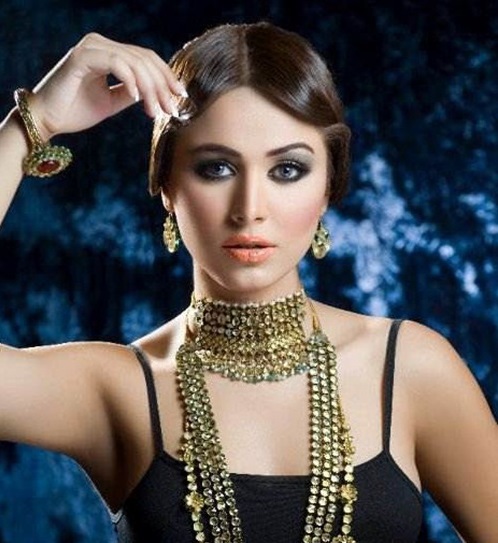 A Pakistani supermodel has been charged with money laundering offences after she was caught carrying over half a million dollars in Islamabad airport.

According to reports, 21-year-old Ayyan Ali – who has modeled everything from mobile phones to ice cream – was jailed after a staggering amount of money was discovered in her carry-on bag.

She was charged with attempting to illegally transport more than the legal $10,000 cash limit out of the country on March 14 – and has been in a Rawalpindi prison since.

Ali was last seen in public wearing an ‘uncharacteristic’ black burka outside court as a horde of fellow models gathered nearby.

In recent years she has been one of the most famous models at Pakistan Fashion Week which has been described as a ‘three-day extravaganza’.

A former model-turned-public relations guru says the country’s fashionista circles can talk about nothing else.

Frieha Altaf added: ‘Some are unkind because they are jealous â€“ everyone b*****s about the beautiful people.’

Ever since she was caught in the VIP departure lounge ofÂ Benazir Bhutto International Airport, she has been housed in Adiala which is the central prison of the garrison city Rawalpindi.

Officials there have denied claims she is receiving special privileges because of her celebrity status with one officer saying private cells are only made available for government officials and the ‘highly educated’.

She has been denied bail to the outrage of her lawyer who said: ‘All agencies have interrogated her and she is no more required for any purpose whatsoever.

Maheen Khan said: ‘My first reaction was there goes one more girl. A lot of these girls come from much protected families and can be very naive. I think of her as a victim.’

Suspicions peaked when she reportedly told a customs court that she was given the money from a businessman with connections in Pakistan’s politics.

Khurram Latif Khosa – one of the lawyers working on Ali’s case – said the money came from a legitimate property sale and the model had no intention of taking it out of the country.

He claims she had yet to check into her flight was waiting in the lounge for her brother who was was going to take the cash to Karachi.

Khosa says Ali is being unfairly treated by the press and courts because of her position as one of the country’s most glamorous and well-known personalities.

He said: ‘We respect religious scholars, we respect so-called intellectuals but why don’t we respect in this society people who are promoting our culture?Â

‘She is a cultural ambassador projecting an image of Pakistan which is liberal, progressive and can compete with anyone in the world.’

PR powerhouse Altaf believes ALi has the strength to recover from the ordeal, saying: ‘It takes guts as well as beauty to stand up and be a model in this country.

‘You have to have the strength to resist the pressure that comes from society, the social stigma, the questions people always have about you.’