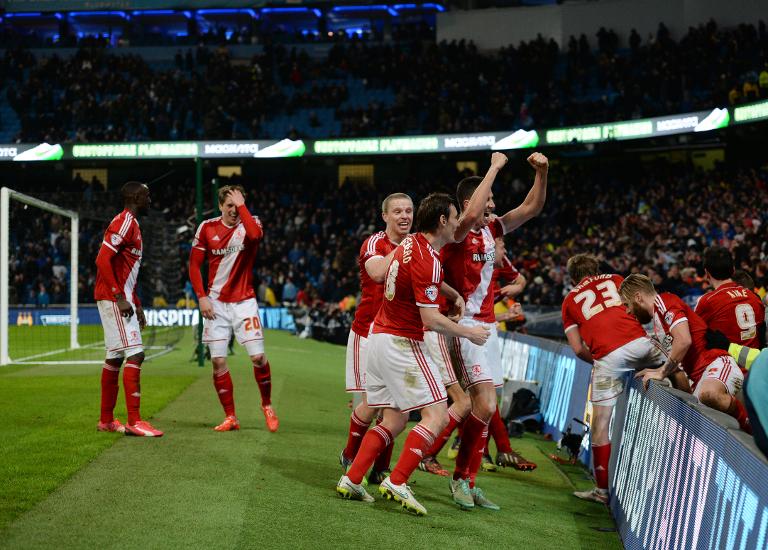 Middlesbrough stole a march on their Championship promotion rivals as they returned to the top of the table with a 1-0 win against lowly Wigan on Friday.

Aitor Karanka’s side kept themselves firmly in the hunt for automatic promotion to the Premier League thanks to Patrick Bamford’s 17th strike of the season.

The on-loan Chelsea striker bent a low effort into the bottom corner in the 20th minute and that was enough to see off second-bottom Wigan and send Middlesbrough one point clear of second placed Bournemouth.

The Cherries has started the day in first place, but they needed a powerful header from substitute Kenwyne Jones to rescue a 1-1 draw at play-off contenders Ipswich.

The home side had taken a ninth minute lead after some lacklustre Bournemouth defending allowed former West Ham forward Freddie Sears to strike.

Fourth placed Watford missed out on the chance to go top with a 2-2 draw at sixth placed Derby.

The Hornets still ended the happier of the two teams after salvaging a point despite the dismissal of Marco Motta.

Slavisa Jokanovic’s team struck first through Matej Vydra, but the game changed when Motta tripped Johnny Russell and Darren Bent equalised from the spot near the end of the first half.

When Tom Ince scored a superb individual goal early in the second half, it looked bleak for 10-man Watford, but Odion Ighalo equalised late on to move his side to within one point of the top two.

It was a good afternoon for Norwich, who moved up to third place after a 1-0 win at Brighton.

It was exactly one year ago this weekend when the Canaries sacked Chris Hughton, but there was to be no revenge for the Brighton boss as his new side were downed by Bradley Johnson’s cool finish just after the hour.

Brentford also moved back into the top six after a 4-1 thrashing of west London rivals Fulham.

The Bees surged into a two-goal lead thanks to Stuart Dallas’s brace.

Ross McCormack’s penalty got the struggling Cottagers back in it with 20 minutes to go, but late efforts from Alan Judge and Ramallo Jota ensured Brentford romped to a memorable victory.

Wolverhampton Wanderers maintained their play-off challenge with an impressive 2-1 win at Nottingham Forest.

Kenny Jackett’s side went in front just 20 seconds after the restart with a fine effort from distance by Benik Afobe and Bakary Sako’s 72nd-minute penalty brought them level on points with sixth-placed Derby despite Dexter Blackstock’s late strike.

Millwall breathed fresh life into their survival fight with a 2-1 win against 10-man Charlton Athletic in a dramatic south London derby at The Den.

Neil Harris’s side missed a first-half opportunity to take the lead when Lee Gregory’s spot-kick was saved after Charlton defender Chris Solly was sent off for handling on the line.

Alou Diarra put Charlton ahead midway through the second half, but third-bottom Millwall hit back to equalise through former Everton winger Magaye Gueye before on-loan Southampton defender Jos Hooiveld struck in the 87th minute to give the hosts their first home win of 2015.

Elsewhere, fourth-bottom Rotherham United’s plight is more precarious after they went down 2-1 at Birmingham City.