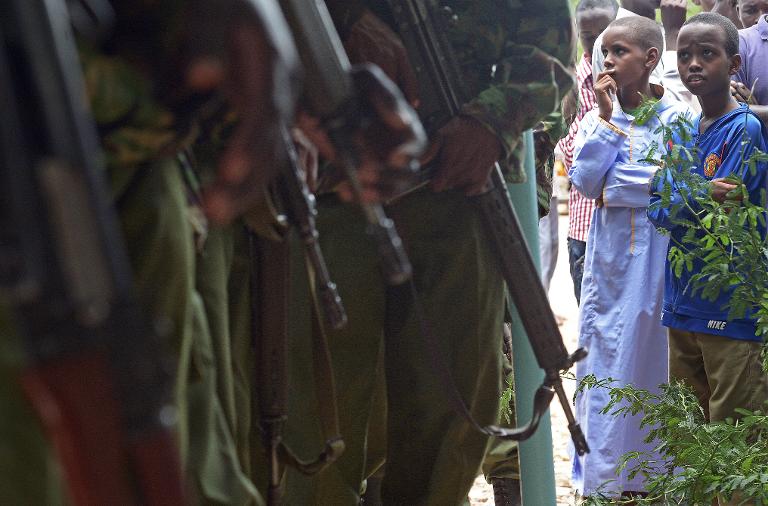 Kenya’s president vowed Saturday to retaliate in the “severest way” against Somalia’s Shebab Islamists after they massacred nearly 150 people in a university.

Two days after the Islamist militants lined up non-Muslim students, taunting them, then executing them in Shebab’s bloodiest attack to date, President Uhuru Kenyatta warned they would face justice for the “mindless slaughter”.

The day-long seige at the university in the northeastern town of Garissa, close to the border with Somalia, claimed 148 lives, including 142 students, three police officers and three soldiers.

The massacre was Kenya’s deadliest attack since the 1998 bombing of the US embassy in Nairobi, and Kenyatta declared three days of national mourning beginning Sunday, calling for the killings to unite and not divide the country.

Earlier on Saturday, the Shebab warned of a “long, gruesome war” unless Kenya withdrew its troops from Somalia, and threatened “another bloodbath”.

Hours after Shebab’s warning, police in Garissa paraded four corpses of the gunmen piled on top of each other face down in the back of a pick up truck followed by a huge crowd.

Police insisted the grim display was to see if anyone could identify the assailants, but some onlookers threw stones at the bodies as they passed, while others jeered and shouted at the dead.

In Nairobi’s ethnic Somali district demonstrators took to the streets demonstrating against the Shebab, calling for unity in the country.

Five men have been arrested in connection with Thursday’s attack.

Forensic investigators continued to scour the site where one student shocked security forces — who had said all students were accounted for — by emerging unharmed from a wardrobe where she had hidden for over two days.

A Kenya Red Cross spokeswoman said that the 19-year old was traumatised and dehydrated but physically unharmed and undergoing assessment by doctors.

Over 600 students from the now closed college on Saturday boarded buses for the home towns around the country.

Interior ministry spokesman Mwenda Njoka said five arrests had already been made, including three “coordinators” captured as they fled towards Somalia, and two others in the university.

The names of the three suspected organisers were not given, but Njoka said the two arrested on campus included a security guard at the university, and a Tanzanian named as Rashid Charles Mberesero, found “hiding in the ceiling” and holding grenades.

A $215,000 (200,000 euro) bounty has also been offered for alleged Shebab commander Mohamed Mohamud, a former Kenyan teacher said to be the mastermind behind the Garissa attack.

Kenyatta said it was clear terrorist masterminds were operating inside Kenya and not just Somalia.

“The planners and financiers of this brutality are deeply embedded in our communities”, he said, warning that “radicalisation is happening openly” in Islamic schools by “rogue” preachers.

Hurling grenades and firing automatic rifles, the gunmen stormed the university at dawn on Thursday as students were sleeping, shooting dead dozens before setting Muslims free and holding Christians and others hostage.

Just before darkness fell, Kenyan troops moved in on the dormitory where the gunmen were holed up, apparently determined to prevent a drawn-out siege like that seen in the Westgte shopping mall in Nairobi in September 2013, also carried out by Shebab fighters.

The militants vowed more attacks against Kenya, which invaded southern Somalia in 2011 and is now fighting alongside the African Union force battling the Shebab.

“We will… stop at nothing to avenge the deaths of our Muslim brothers until your government ceases its oppression and until all Muslim lands are liberated from Kenyan occupation,” the Shebab said in a statement released Saturday.

“Until then, Kenyan cities will run red with blood…. This will be a long, gruesome war of which you, the Kenyan public, are its first casualties.”

On Saturday, United States embassy vehicles were seen entering the campus. In past attacks, including the Westgate massacre, FBI investigators helped Kenyan police with forensic examinations.

“Forensics and investigations are still going on,” Njoka said.

The Shebab on Saturday described how they had specifically singled out non-Muslims to kill, gathering them together before executing them.

Survivors who hid from the attack have recounted how the gunmen called on people to come out of their dormitory bedrooms and lie on the ground face down, but then killed them.

“The mujahedeen stormed the university compound and swiftly proceeded to the halls of residence where they had gathered all the occupants,” the Shebab statement said.

“And since the attack targeted only non-Muslims, all Muslims were allowed to safely evacuate the premises before executing the disbelievers.”

There has been growing criticism in the media that critical intelligence warnings were missed.

Kenya’s National Union of Teachers have called for extra security measures, warning advising “all teachers in northern Kenya to leave if they feel unsafe.”