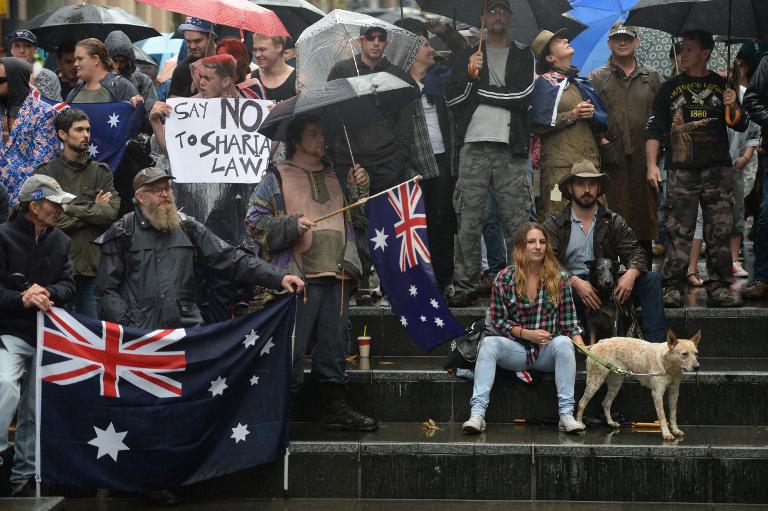 Protesters waving Australian flags and carrying signs such as “Yes Australia. No Sharia” rallied around the country on Saturday in events organisers said were against Islamic extremism.

The “Reclaim Australia” events drew hundreds of supporters but also triggered counter-rallies from other groups who criticised them as racist and called for greater tolerance.

“We are pro-Australian values and anti-extreme Islam, but we’re not anti-Muslim,” Reclaim Australia spokeswoman Catherine Brennan told AFP, adding there was no racism behind the rallies, which she said had attracted people from diverse backgrounds.

“Since when is it being racist to love your country and to love the values and culture that you’ve been brought up with?”

“We’re against the extremists of one particular religion,” he said.

In Sydney, hundreds braved the rain to rally in Martin Place, near the site of a deadly siege in which a lone gunman inspired by the Islamic State group took customers and staff hostage in a cafe in December. Two people, and the gunman, were killed in that incident.

“We have an extreme ideology called Islam which is starting to gain a foothold in our societies,” one speaker told the event, in which one person held a home-made sign reading “No Islam. No Sharia. No Halal”.

In Melbourne, tensions between competing protesters led to scuffles, with police on horseback forced to form a barrier between the groups, and paramedics treating several people for injuries.

Police arrested three people in Melbourne, while a man in Hobart was arrested for assault and two women were removed for breaching the peace at the Sydney rally.

In Queensland, former politician Pauline Hanson defended the rallies, which on its website Reclaim Australia said were against sharia law and the burqa and in support of gender equality.

“We have people here today who stand against racism. So do I,” Hanson said.

“Events like theirs incite racism and violence against Muslims,” Clare Fester, who organised the counter-protest in Sydney, said in statement.

“Their attacks on Islam imply that anyone who is a Muslim is violent, supports terrorism and is anti-woman. This in an attempt to target all Muslims with classic racist stereotypes.”