Home World From rebellion to stalemate: a year of war in east Ukraine 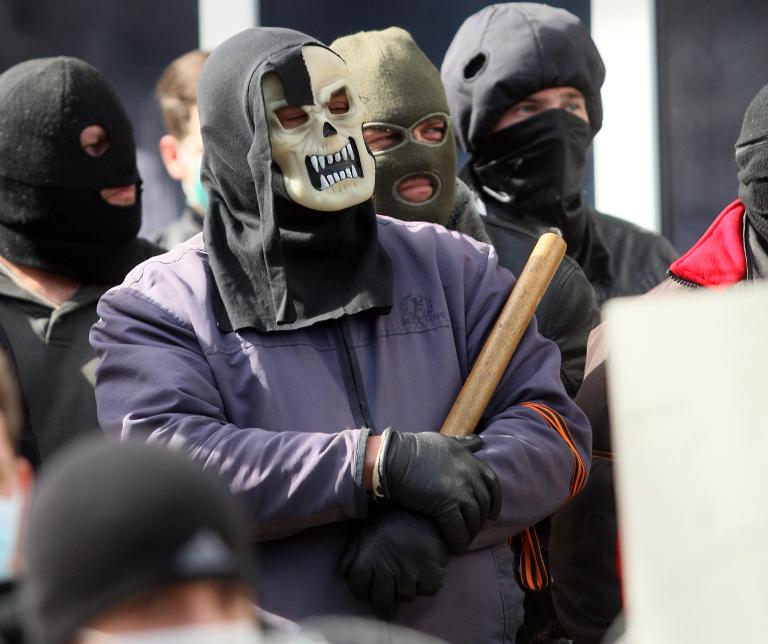 On April 6, 2014, pro-Russian activists stormed the offices of the Donetsk regional administration and the Lugansk office of the secret service in eastern Ukraine, sparking a year-long insurgency against the Kiev government in which 6,000 people have died.

Their ire was directed at the pro-westerners who took the helm in Kiev after massive street protests ousted pro-Russian president Viktor Yanukovych in February last year.

The rebels claimed Russian-speakers in east Ukraine were under threat from the “fascist junta” in Kiev, and were hostile to plans to strengthen ties with the EU and NATO.

“Kiev’s stripped us of our right to speak Russian and is rehabilitating fascism! We want to be part of Russia sooner rather than later,” 63-year-old pensioner Valentina Fiodorova told AFP at the time.

Rebel leaders, often nostalgic for the old days of the former USSR, quickly proclaimed the creation of the “Popular Republics of Donetsk and Lugansk”.

Some wanted to see a federal Ukraine giving large autonomy to the regions, others favoured independence. Some even sought to join Russia as had been the case for Crimea, annexed two weeks earlier by the Kremlin in what led to the worst East-West crisis since the end of the Cold War.

As the insurgency spread, cities and towns fell into the hands of the separatists and armed militia groups mushroomed.

There was little to no response from Kiev, which appeared to be losing sway over the once thriving industrial and mining heartland in the east where an independence referendum was held May 11 in rebel-held areas.

Dismissed as illegitimate by Kiev and the West, the vote handed an overwhelming victory to the pro-Russian camp.

In mid-April, however, the Ukraine government launched an “anti-terrorist operation” to reconquer territory lost to the rebels, with the first deadly fighting taking place at Donetsk airport on May 26.

In Moscow President Vladimir Putin demanded “an immediate halt to the punitive operation”.

“Millions of Russians and Russian-speaking people live in Ukraine and will continue to do so. Russia will always defend their interests,” Putin said in an emotionally-charged speech to both houses of parliament at the Kremlin on 18 March, two weeks ahead of the insurgency.

Western governments feared Moscow aimed to prevent Kiev at any cost from drawing closer to the EU and NATO.

As the weeks went by war spread across the east, with the separatists gaining ground against the scattered and disorganised forces of the loyalist army.

Both Kiev and NATO denounced massive Russian support to the insurgents, accusing the Kremlin of pouring manpower, tanks and weaponry across the partially rebel-controlled border. Moscow denied all involvement while saying some Russians had volunteered to join rebel ranks.

But in July the Ukrainian army hit back, recapturing Slavyansk and the strategic port city of Mariupol on the sea of Azov.

Then on July 17 the conflict took a dramatic turn when a Malaysia Airlines plane was shot out of the sky over a rebel-held area, killing all 298 people on board.

Amid global outrage, EU nations and the United States agreed to stiff sanctions against Moscow, implicitly accused of supplying rebels with the missile used in the attack despite its denials.

The rebels then counter-attacked late August, strengthening their defences around Donetsk and Lugansk, threatening Mariupol and inflicting a stinging defeat against the army at Ilovaisk, where more than 360 Ukrainian troops were killed and 180 listed missing.

“The presence of Russian troops is the main reason for these defeats. Without the Russians we would’ve completed our work by the end of summer,” a highly-placed Ukraine security source told AFP on condition of anonymity.

After months of failed diplomacy, the authorities and the rebels finally signed a ceasefire deal in September in the Belarussian capital of Minsk that was aimed as a first step towards a political settlement that would include giving more autonomy to the rebel regions.

But the fragile ceasefire speedily crumbled with fierce fighting resuming, notably around Donetsk airport that finally fell into rebel hands in January after a nine-month battle.

In February, however, French and German leaders, Francois Hollande and Angela Merkel, convinced Putin and Ukraine President Petro Poroshenko to breathe new life into the Minsk agreement, and a new ceasefire was signed.

Rebels continued fighting for a further 10 days however, seizing control of the city of Debaltseve, strategically located between Donetsk and Lugansk.

The frontline has since remained frozen with the ceasefire globally respected.