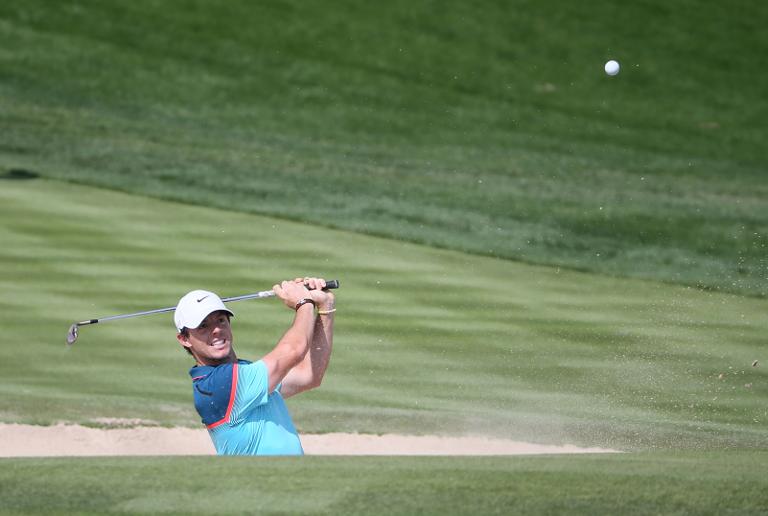 World number one Rory McIlroy chases his third consecutive major title and tries to become only the sixth player to complete a career Grand Slam next week at the Masters.

The 25-year-old from Northern Ireland would become the first European golfer to complete the career sweep of the men’s golf majors with a triumph at Augusta National.

McIlroy would join Jack Nicklaus, Tiger Woods, Ben Hogan, Gene Sarazen and South African Gary Player on the career Grand Slam list, although Woods would remain the youngest to complete the sweep, having done so at age 24 by winning the 2000 British Open.

And McIlroy would do so on the Augusta National layout founded by Bobby Jones, who won his 1930s-era version of a career slam by taking the US and British Opens and Amateurs.

McIlroy might well have already owned the green jacket symbolic of Masters supremacy had he not suffered a back-nine collapse while leading in the final round in 2011 and fired an 80 to finish in a share of 15th.

But that humbling defeat prompted McIlroy to bounce back and win his first major in his next opportunity, the 2011 US Open at Congressional, and since then he has added the 2012 and 2014 PGA Championships and last year’s British Open.

This year, McIlroy won at Dubai and finished second at Abu Dhabi but stumbled in his US tuneups for the Masters, missing the cut at the Honda Classic and opening with a 73 at Doral before rallying to finish ninth and then share 11th at Bay Hill two weeks later.

McIlroy was not unhappy that he had yet to find his top form, hopeful his timing would be perfect for Masters week.

“I sort of like that because if I had played really well the last few weeks, how do I keep this going,” McIlroy said after Bay Hill.

“It’s almost like it’s nice to be able to try and build yourself up. I don’t feel like I’m right there. I feel like I’m just gradually building myself up so it’s actually not a bad position to be in.”

Crowd roars echoing along the back nine around Amen Corner and into golf history have names for their volume, a Jack roar or a Tiger roar, but Augusta National could face a new level of loud in the final round — the McIlroar.

And this time, McIlroy has greater confidence in his ability to grind out a victory.

“I think it’s something that you need,” McIlroy said. “Augusta is one of the most mentally challenging weeks of the year. You get off there on Sunday night and you’re sort of done. It’s a tough week and in that regard.

“But I can feel I’ve made good strides with my long game. If I can just tidy the wedge play a little bit around the greens, hopefully that will be good to go.”

McIlroy downplays the idea he is a runaway favorite, even though the buzz about his chance at history has been building for the past eight months.

“Given how I’ve been playing. I guess if you go on form then probably no,” McIlroy said of himself as a favorite.

“There are a lot of guys that are playing well to be up there, but maybe not the favorite.”

Sweden’s second-ranked Henrik Stenson has had a solid start to the season despite no titles, taking second at Bay Hill and fourth at Doral and the Valspar Championship.

And defending champion Bubba Watson could grab a share of more Masters lore by repeating. Together with his 2012 win, Watson could match Nickalus as the only players to win the Masters three times in four attempts, Nicklaus doing so in 1963, 1965 and 1966.

“Everybody is talking about Rory,” Watson said. “I’m just hoping I can come in under the radar.”

The only other reigning major champion at Augusta this week is 2014 US Open winner Martin Kaymer of Germany, who has yet to crack the top 30 in seven Masters starts.

“The last two or three years I played really well but my putting let me down a little bit,” Kaymer said. “I proved to myself I can play the course. It’s just a matter of making a few putts here and there.”

No one knows that better than Jordan Spieth, the 21-year-old American who shared second last year in his Masters debut and returns to Augusta National off a Valspar title last month.

“This year I feel a little better having closed that tournament out,” Spieth said. “My swing feels better. Putting stroke is getting there. All in all, very confident about where I’m at going in.”