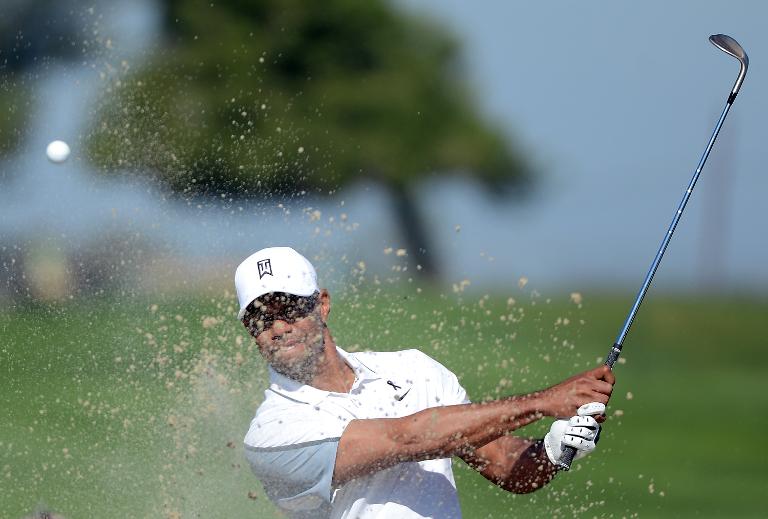 Having endured the worst year of his career, Tiger Woods arrives at Masters week struggling to recapture the form to finish 72 holes, much less add to his 14 major titles.

The former world number one has sunk to 104th in the rankings, his lowest point since before taking his first PGA title at the 1996 Las Vegas Invitational, and played only 47 tournament holes this year.

Forget catching the career record 18 majors of Jack Nicklaus. Set aside the idea of three more PGA wins to match Sam Snead’s all-time victory record of 82. Woods has yet to prove his surgically repaired back and knees can still contend over 72 holes at age 39.

Woods managed only 11 holes at Torrey Pines in February before withdrawing with back issues. He missed the cut in January at Phoenix after a career-worst 82 in the second round.

Back surgery a year ago caused Woods to miss the Masters for the first time in 20 years. He made three comebacks in 2014 but had issues with his back and his game each time, looking less imposing and more irrelevant with every failure.

“I’ve put in a lot of time and work on my game and I’m making strides, but like I’ve said, I won’t return to the PGA Tour until my game is tournament ready and I can compete at the highest level,” Woods said last month after skipping his usual final Masters tuneup at Bay Hill.

“I hope to be ready for the Masters and I will continue to work hard preparing for Augusta.”

If Woods returns to competition as expected next Thursday at Augusta National, it will mark his longest layoff ahead of the Masters since 2010, when he endured a five-month layoff in the wake of his infamous sex scandal that included a humbling public apology telecast worldwide.

– Can Tiger awaken the echoes? –

Few places offer Woods the chance to awaken the echoes like Augusta National, where he has won four times and knows the secrets to success as few others.

In 2010, Woods shared fourth in his comeback. He shared fourth in 2011 and 2013, adding those to his 13 top-10 finishes at Augusta National starting with his record-shattering 1997 groundbreaking first major triumph.

Since then, Woods has never played more than three majors without managing a top-10 finish, a mark he puts at risk in his next major start.

Woods once commanded golf balls to bend to his will, from powerful long tee shots to amazing creativity and execution of rescue efforts and deadly accuracy on the putting green.

But his injury-ravaged back and surgically repaired knees no longer respond in the same way as in the glory days.

He would need to become the first player to win more than three majors after his 39th birthday to catch Nicklaus.

No place better showcases Woods than Augusta National, where he became the first black golfer to win a major title and the first green jacket winner to put cheeseburgers on the Champions Dinner menu.

For all his magical shotmaking, sports fans were drawn to Woods for his fist-pumping passion, his determination and an aura of invincibility that delighted a public far beyond golf’s typical fan base.

Woods won by embarrassing margins, taking full advantage of new technology with a fitness regimen unseen before in golf. Woods spawned a lengthening of courses and a “second cut” at Augusta National as surely as if he had redesigned and reseeded the layouts himself.

Woods noted last December that “Father Time is undefeated,” but as he faces the later stages of his historic career, the world will be watching to see what sort of fight he delivers.