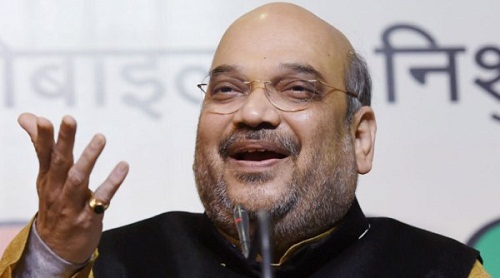 Bengaluru: Attacking the Congress-led opposition for “deliberately spreading misgivings” about land bill, BJP on Friday said the party should stop finding “non- existing” faults with the government and instead concentrate on finding its leader, a dig at Rahul Gandhi’s absence.

In his inaugural address at the two-day BJP National Executive meeting, party president Amit Shah sought to rally the rank and file around the controversial bill, saying it was pro-farmer and BJP was committed to the welfare of peasants.

“Opposition has deliberately spread many misgivings about the bill which is in the interest of farmers. We will take the message to farmers. BJP is friend of farmers.It is farmers who have given us mandate.Â Opposition is desperate, hopeless and directionless.They should stop finding those faults and shortcomings which do not exist,” Shah said.

“Instead of raising non-issues and fictional issues, they should find out where their leader is,” Shah added, taking a dig at the Congress over the absence of its Vice-President who is on a sabbatical for introspection.Â

Under attack over the Land Acquisition Bill, the BJP said it will launch a mass contact programme to dispel “myths and propaganda” spread by the opposition. The party will also engage farmers in dialogue even as it insisted that it remains open to changes suggested by rival parties and farmers.

Prime Minister Narendra Modi, Finance Minister Arun Jaitley, party patriarch L K Advani were on the dais as Shah addressed the delegates, which included 111 National Executive members besides a number of special invitees, including chief ministers of the BJP-ruled states and its state presidents.Â