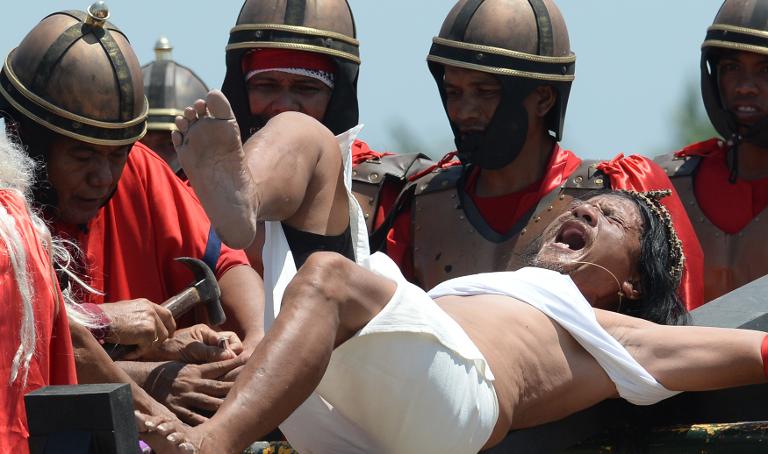 Devotees in the fervently Catholic Philippines marked Good Friday by being nailed to crosses and whipping their backs bloody, in extreme acts of devotion that attracted thousands of spectators.

The annual ritual in scorching hot farmlands just outside of Manila is one of many colourful outpourings of faith in the Southeast Asian nation, where 80 percent of its 100 million people are Catholics.

“I feel no pain because I know I am one with my God in suffering,” 30-year-old construction worker Arjay Rivera told AFP before he slit his back with broken bottles and razors, later whipping himself with bamboo flails to keep the wounds open.

As the flagellants made an excruciatingly slow barefoot march to the hill in San Juan, a rural district of San Fernando north of Manila where the crucifixions were to take place, some of them stopped at times to lay face down on the hot pavement and let children flog them with twigs.

Five men had nails hammered through their palms and feet while four others, some with fake beards drawn on their faces to resemble Christ, were tied to the crosses.

They wailed in pain as attendants, costumed as Roman centurions, pounded the nails through their palms.

“My faith got me through my illness. I will continue doing this for as long as I live,” one of the men, Wilfredo Salvador told AFP after he was taken down from a cross, his hands and feet wrapped in bandages.

“It was painful up there, but I felt light. I can’t explain it. I would say my faith is very strong,” added the 50-year-old, who said he had recovered from a nervous breakdown several years ago.

Several of the men have undergone multiple crucifixions over the years.

Seven-month pregnant Catherine Madoles wiped off blood that had splattered on her legs and half-exposed tummy.

Her brother, Genesis Reyes, was one of those whipping his back, undergoing the ordeal for the first time on Friday so that she could have a safe delivery, she said.

“I have a high-risk pregnancy because I’m diabetic. I hope this devotion will help me,” the 32-year-old housewife told AFP as she took refuge from the searing heat.

San Fernando Archbishop Florentino Lavarias has discouraged the bloody practice, saying there are other ways to profess one’s faith.

“Our acts should be geared toward good works. Christian life is not something that is done overnight,” he counselled.

“We don’t have the exact record of the money… but for sure the Good Friday activities help our locals in their businesses,” he said.

While organisers tried to keep the event solemn, the general mood appeared more festive with dozens of hawker stalls selling food and souvenirs, giant streamers of mobile phone companies set up in various places and crowds taking photos with their smartphone and tablet cameras.

Above the crucifixion hill, a huge brown kite in the shape of a cross flew overhead.

Foreign tourists who flocked to the spectacle reacted with both shock and fascination even as blood from the flagellants splattered their clothing.

“It’s quite gross and bloody. I would never have a selfie taken here,” Jorene Chai, a 26-year-old tourist from Singapore, told AFP.

She and three other friends made a side trip to the site from a food tour of Pampanga province.

Waldemar Traczyk, 50, a history professor from Poland, said he saved up for seven years so he and his wife could fly to the Philippines to witness Friday’s events.

“This is too much blood… but it is interesting to know why a 17th century practice in Europe still persists in the Philippines,” he told AFP.

The Philippines is known around the world for its fervent brand of Catholicism, which was introduced by Spanish colonisers in the 1500s.

A mass by Pope Francis in the capital’s main outdoor park a week later drew a record crowd of six million people.