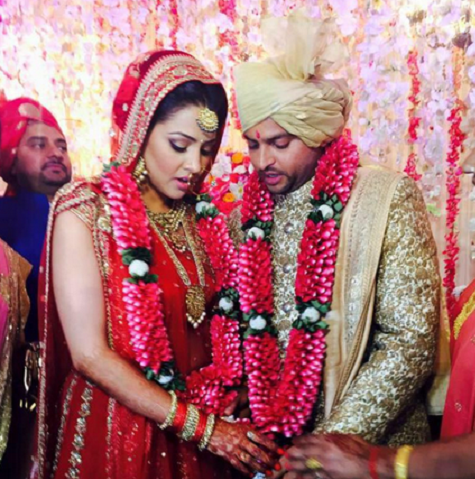 New Delhi:Â Indian cricketer Suresh Raina got married with his childhood sweetheart Priyanka in a private ceremony, which was attended by family members, close friends and a few of his team-mates at at The Leela Palace hotel in New Delhi on Friday.

It is learnt that Priyanka and Raina’s friendship datesÂ back to their childhood days. Priyanka is presently working inÂ the Netherlands.

“The entire Indian team, including Captain Mahendra Singh Dhoni and Virat Kohli, were present for the wedding.

“The invitation is also being sent to the Chennai Super Kings. Raina will not be going for honeymoon soon as he has to participate in the IPL”, the source said.

Talking about the girl, the sources revealed, “Raina family was looking for an educated girl. She is down to earth. He wanted the wife who can look after him and family, and she is the right choice”.

Prime Minister Narendra Modi had also sent his wishes to the couple.

“Raina has received a letter of blessings from our honourable Prime Minister. The invitation was sent to the Prime Minister as Raina was nominated by Modi for the Swachh Bharat Abhiyan,” the source added.

Meanwhile Raina himself revealed the guest list of the wedding.

“We have chosen the venue in Delhi since I have lots of friends here. Virat (Kohli), Shikhar (Dhawan), Ishant (Sharma) aur meri UP ki team ke bahut saare players hain, jo sab aa rahe hain. Some of my friends from Lucknow, London and Dubai, and my entire cricket team, will be coming. It’s just a get-together,” he said.

Besides being India’s star cricketers, Raina is an Arts graduate from Lucknow University while Priyanka has done B.Tech from Krishna Institute of Engineering and Technology (KIET).

Big names from politics and entertainment world, besidesÂ fellow cricketers, are expected to attend the bash.