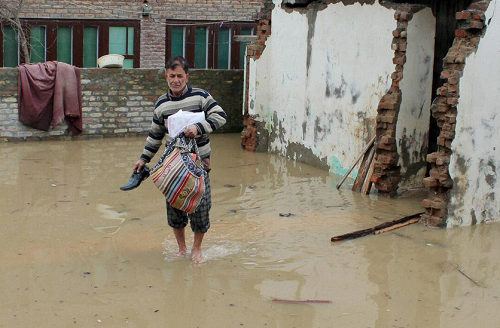 Srinagar: Anguished residents in the flood affected areas of Jammu and Kashmir have expressed fears about their homes falling apart because of the ongoing downpour.

“We are facing many problems because our home has been deluged with water for the past five days. Nobody is doing anything. We don’t have any other place to go and we are afraid of the house falling apart,” said a resident in Srinagar.

Though the state Met department on Friday predicted a substantial decrease in the rainfall currently lashing Jammu and Kashmir, the residents complained about their lives being disrupted by swelling river waters and the heavy downpour, and demanded immediate and substantial relief.

“Rainfall, particularly in J-K, will decrease substantially. We don’t expect any heavy rainfall for the next four-five days. Western disturbance that caused heavy rainfall is weakening, there will only be light rainfall here and there (J-K),” said BP Yadav, Director, Met Department.

A Rajouri resident added that the administration should focus on providing relief to far flung places.

“There is a flood like situation here. The river is rising. We are very worried right now. The administration should take care of far flung places,” said Rajouri resident, Lal Hussain.

Jammu and Kashmir is experiencing heavy rainfall once again today, leading to a rise in the water levels of the state’s rivers.

The state meteorological department had earlier on Thursday said that skies would be clear throughout the day but light rainfall was expected in the evening.

On Monday, the state government had declared the region flooded after two days of incessant rains caused the waters of the Jhelum River to surge over the danger mark.