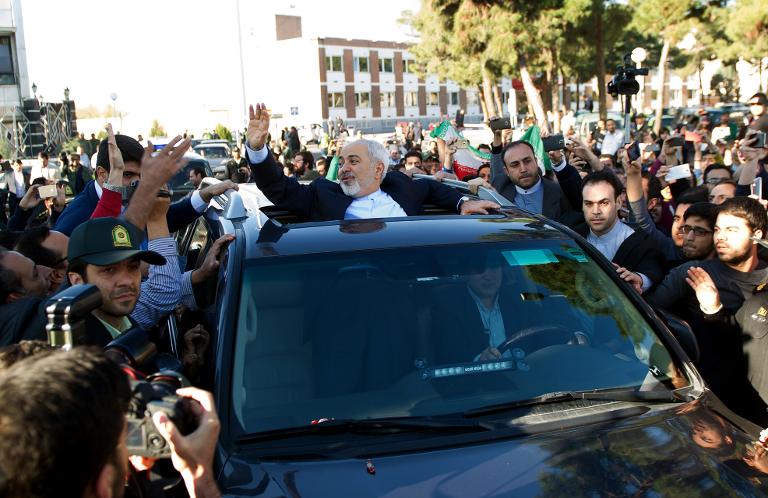 Iran vowed to stand by a nuclear deal with world powers Friday as President Hassan Rouhani promised it would open a “new page” in the country’s global ties.

Keen to win over domestic sceptics, Iran’s leaders pushed the merits of a potentially historic agreement, with clerics touting its virtues at Friday prayers in mosques.

The framework agreement — reached Thursday after marathon talks in Switzerland — was hailed by world leaders as a major breakthrough in the 12-year standoff between Iran and the West, which has long feared Tehran wants to build a nuclear bomb.

But in a live televised address, Rouhani said it could mark a turning point for the Islamic republic’s relations with the rest of the world.

“If the other side honours its promises, we will honour our promises,” he said.

“New cooperation with the world — both in the nuclear sphere and other areas — will open a new page” for Iran, he said.

The Islamic republic’s supreme leader Ayatollah Ali Khamenei, who will have the final say on any deal, has not yet reacted to Thursday’s announcement.

But the proposed agreement could still face opposition from Iranian hardliners against making any concessions limiting the country’s nuclear programme.

Several conservative websites published comments from Mehdi Mohammadi, a political analyst, describing the deal as “in no way balanced” and parts of it as a “disaster”.

The country’s powerful religious authorities lined up behind it however.

In a sermon that state media said was replicated nationwide, Ayatollah Mohammad Emami-Kashani praised the agreement to worshippers in Tehran.

“This framework is great and it is a victory for us as it made the Western world accept Iran’s right to pursue nuclear energy and technology,” Emami-Kashani said.

Earlier, well-wishers had hailed Iran’s nuclear negotiators as they returned to Tehran from the talks in Lausanne, with dozens lining the streets and carrying Iranian flags.

Crippling sanctions over Iran’s nuclear ambitions have left the country’s economy reeling and the announcement of the deal was greeted with celebrations.

Hundreds took to the streets of Tehran in the early hours of Friday, with drivers sounding their horns in approval, people flashing V-signs for victory and dancing while waving white handkerchiefs in a traditional Iranian celebration.

US President Barack Obama had earlier welcomed the “historic understanding” with Iran after decades of hostility, warning like other leaders that work remains to finalise a highly complex agreement by June 30.

Hostile Republicans in the US Congress, who remain suspicious of Iran’s pledges, are also threatening to push for new sanctions from April 14.

And Washington’s key ally Israel reacted with fury, with Netanyahu demanding that Iranian recognition of the Jewish state’s right to exist be written into the deal, as he convened top officials for talks.

“This deal would pose a grave danger to the region and to the world and would threaten the very survival of the state of Israel,” Netanyahu said.

“Israel will not accept an agreement which allows a country that vows to annihilate us to develop nuclear weapons.”

Israel has repeatedly warned that it could take military action if threatened by a nuclear-armed Iran, though analysts say strikes are unlikely.

Under the outline deal, the United States and the European Union are to lift all nuclear-related sanctions on Iran once the UN atomic agency has verified that Tehran has stuck to its terms.

All past UN nuclear resolutions on Iran would also be lifted, but diplomats have warned that sanctions can be re-imposed.

The proposed limits will see Iran’s stocks of highly enriched uranium cut by 98 percent for 15 years, while its unfinished Arak reactor will not produce weapons-grade plutonium.

The deal will also see Iran reduce by roughly two-thirds — to 6,104 from around 19,000 — the number of uranium centrifuges, which can make fuel for nuclear power but also the core of a nuclear bomb.

The so-called P5+1 group — the United States, Britain, China, France and Russia plus Germany — hope that the deal will make it virtually impossible for Iran to produce nuclear weapons.

Iran, one of the world’s major oil producing countries, has always denied seeking the atomic bomb, saying its activities are for energy generation and research.

European Union heavyweights Germany and France warned Friday that a deal was far from done.

“There is no guarantee of successful negotiations,” he said.

His caution was echoed by French Foreign Minister Laurent Fabius, who said Iran would “still have to go all the way” to a deal.