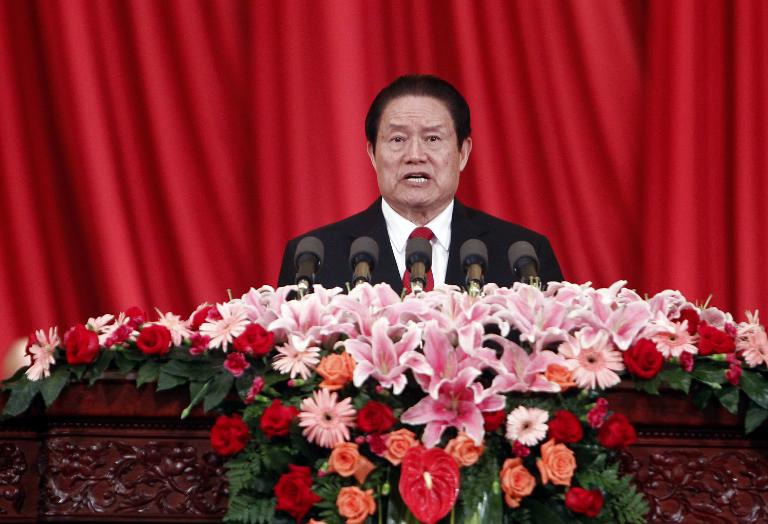 China’s former security chief Zhou Yongkang was charged Friday with bribery, abuse of power and disclosing state secrets, authorities said, making him the most senior official prosecuted in decades and setting the stage for a dramatic trial.

Zhou — seen as an adversary of President Xi Jinping — is the most prominent victim of the Communist Party’s much-publicised anti-corruption drive, which has targeted high-level “tigers” as well as low-level “flies”.

He had a background in the oil industry and accumulated vast power as he rose through the ranks to become a member of the ruling party’s elite Politburo Standing Committee (PSC), the most powerful body in China.

“The defendant Zhou Yongkang… took advantage of his posts to seek gains for others and illegally took huge property and assets from others, abused his power, causing huge losses to public property and the interests of the State and the people,” said the indictment, posted online by prosecutors.

“The social impact is vile and the circumstances were extraordinarily severe,” it said, adding that he also “intentionally leaked state secrets”.

The document was filed with a court in the northern port of Tianjin, the Supreme People’s Procuratorate added, but it gave no indication of a trial date.

Chinese courts are closely controlled by the ruling party and a guilty verdict is a certainty.

The proceedings will be the most significant in China since the infamous Gang of Four — which included Mao Zedong’s widow Jiang Qing — were put on trial and blamed for the chaos of the Cultural Revolution.

Xi has consolidated enormous power since taking office in 2012 and Zhou’s fate will “establish Xi Jinping’s ultimate authority over the entire country”, said Willy Lam, a politics specialist at the Chinese University of Hong Kong.

“This will strike fear into the hearts of his opponents or potential opponents, because Xi Jinping has total control over the entire anti-corruption apparatus,” he added.

Zhou’s fall sent shockwaves through the ruling party. After months of rumours, party authorities announced last July they were investigating him, and he was expelled from the party and formally arrested in December.

Now 72, he retired in 2012 as part of a once-a-decade leadership handover, but senior Chinese politicians normally remain significant players even after officially stepping down, and are generally immune from retribution.

Days after Zhou’s arrest, the Communist Party’s flagship People’s Daily newspaper branded him a “traitor” and likened him to several past turncoats who were all executed — setting off speculation that Zhou himself could face a similar fate.

Under Chinese law bribery can carry the death penalty in some circumstances, while the maximum penalty for leaking state secrets is seven years in prison.

Lam said a suspended death sentence — normally commuted to life imprisonment — was possible, but added: “This is the most senior official since the Cultural Revolution to have been incriminated for corruption. So to set an example to all, Xi Jinping might favour a death sentence.”

Communist authorities have touted the anti-corruption drive as a root-and-branch reform of the party to address an issue that causes deep and widespread public anger.

But critics note that China has failed to implement institutional safeguards against graft, such as public asset disclosure, an independent judiciary, and free media, leaving the effort open to being used for political faction-fighting.

The Communist party is riven by internal divisions but consistently seeks to present a united front to outsiders.

Several of Zhou’s associates have also been brought down in the campaign, among them Jiang Jiemin, the former head of the body that regulates China’s state-owned firms.

He is a former head of the China National Petroleum Corporation, a post previously held by Zhou, and the two are reportedly part of a Communist Party faction with roots in the oil industry, known as the “petroleum gang”.

The hearings will be the first time Zhou has been seen in public since October 2013. Officials have promised that they will be open in accordance with Chinese law, but attendance at previous high-profile cases has been closely controlled.

When former high-flyer Bo Xilai — a Zhou ally who fell after a scandal around the killing of a British businessman — was prosecuted for bribery, non-official media were limited to a “live” written transcript of events, whose accuracy was impossible to verify independently.

The China director of Human Rights Watch, Sophie Richardson, said on Twitter: “Zhou Yongkang, pivotal in denying so many the right to a fair trial, won’t get one himself.”