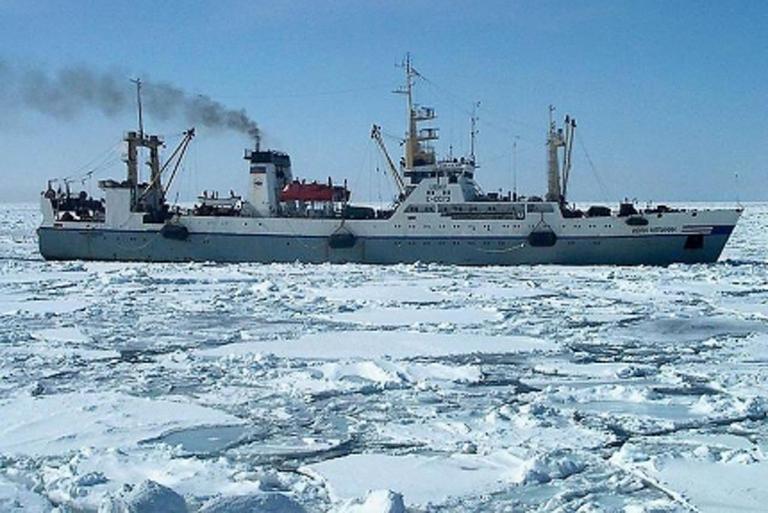 A fishing trawler sank in freezing waters off Russia’s Far East on Thursday, killing at least 56 people and setting off a frantic search for survivors that led to dozens being rescued alive.

In the worst such accident in recent Russian history, some 132 people were on board the trawler Dalny Vostok when it went down at around 6:30 am (2030 GMT on Wednesday) in the Sea of Okhotsk off Kamchatka peninsula, possibly after a collision.

Sixty-three people were rescued alive while 13 were still missing as rescuers battled roiling seas. The emergency ministry put the death toll at 56.

Survivors were waiting aboard rescue boats for a ship with medics to arrive after a helicopter made a failed attempt to pick them up amid waves as high as two metres, an emergency ministry spokeswoman said.

Those in the most serious condition were to be airlifted to a hospital in the city of Magadan, 250 kilometres (155 miles) to the north.

Russian investigators said the trawler included 78 Russian citizens, 42 Myanmar nationals, five from Vanuatu, three Latvians and four Ukrainians, without elaborating on the nationality of those who died.

“Nine people are in grave condition, some are unconscious and some in a state of shock,” said Tatyana Yukhmanova, spokeswoman for the emergency ministry in the Kamchatka region, which is taking part in the operation.

“Although they were wearing wetsuits, they suffered hypothermia because the water temperature is around zero degrees Celsius (32 degrees Fahrenheit),” she told AFP.

The victims’ bodies will be transported to the port of Korsakov on the island of Sakhalin for identification, but the journey will take three days, RIA-Novosti agency reported.

The 1989-built vessel was operated by Magellan, a company based in Nevelsk, a port city on Sakhalin in the Russian Far East.

It was purchased only last year by Magellan and before that was operated by Baltic marine fishing company and was called Stende.

Speculation mounted on the possible reasons for the accident, in which the ship apparently sank so quickly that the captain did not manage to make a distress call.

Investigators were seizing documentation from the ship’s owners and conducting searches in the ship’s home port in Nevelsk as well as in the far eastern port city of Vladivostok from where the ship departed on January 3.

“The investigation plans to question members of the crew and company management shortly,” the committee said in a statement.

“Currently the investigation is looking into a possible collision with an obstacle damaging the ship’s hull near the machine room as the most likely reason for the ship’s rapid sinking,” it said.

But a collision is only one possibility, with as many as 10 possible scenarios being considered, Emergencies Minister Vladimir Puchkov said.

Sakhalin’s acting governor Oleg Kozhemyako said that the ship was in adequate condition and likely capsized due to weight distribution violations.

“Most likely loading and ship balancing rules were violated. Either they had the lower decks empty or they didn’t load the ballast on time,” he said in televised remarks. “The vessel capsized,” he said.

One expert questioned whether many of the people on board were working legally.

Pyotr Osichansky, who heads the Vladivostok-based centre for investigations of naval accidents, told Channel One television that when the ship departed Vladivostok, it had just over 60 people on it.

“That means that most likely (other) workers were taken on board in (South Korean port) Busan and are therefore illegal,” he said.

Kozhemyako, the Sakhalin governor, said that the foreigners on board were not wearing lifejackets or wetsuits, raising the question of whether the ship had safety equipment only for the official crew.

Many fishing vessels trawl the seas of the Russian Far East.

Last December, a South Korean fishing boat sank in the Bering Sea, between the eastern coast of Russia and Alaska, with 60 aboard, seven of whom were rescued.

The latest accident is the worst in Russia’s recent history. In 2011, 53 people died in the wintertime sinking of the Kolskaya offshore drilling rig in high seas near Sakhalin.