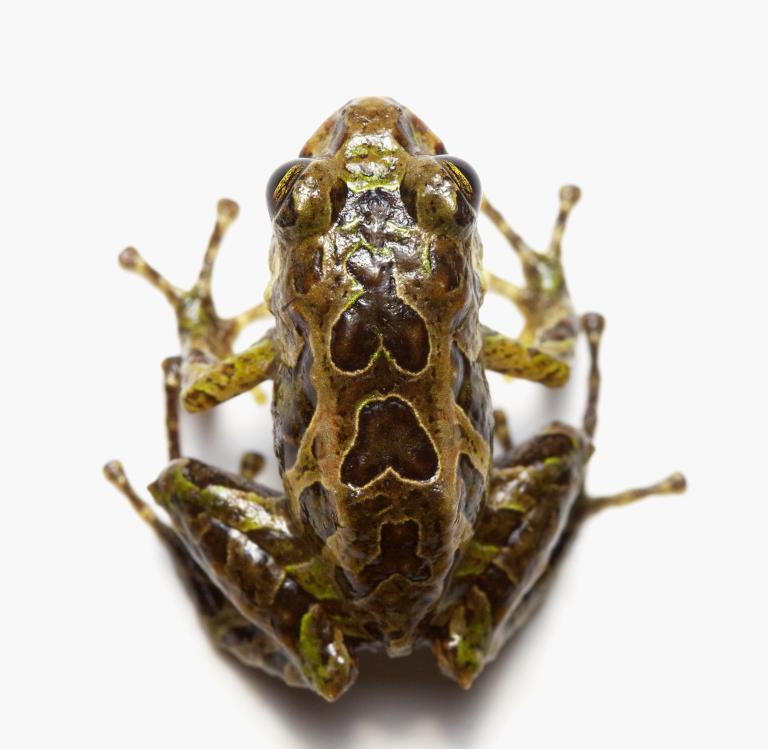 It doesn’t turn into Prince Charming, but a new species of frog discovered in Ecuador has earned the nickname “transformer frog” for its ability to change its skin from spiny to smooth in five minutes.

The tiny frog, which measures about two centimeters (three-quarters of an inch), was found in the misty forests of the Andes mountains, and lives in a mossy habitat where its shape-shifting powers likely help it to camouflage itself, researchers said.

“The strangest, most outlandish thing is that this species can change the texture of its skin,” said Ecuadoran biologist Juan Manuel Guayasamin, who led the research team that announced the discovery.

The species, dubbed Pristimantis mutabilis, is described in the April issue of the Zoological Journal of the Linnean Society.

While some octopuses, an invertebrate animal, can change the color and structure of their skin, “no one had ever described a vertebrate species that changes skin texture,” Guayasamin told AFP.

“Reptiles that change skin color have been documented, like chameleons, but never had such dramatic changes in skin texture been seen,” he said.

Other frog species change the texture of their skin over the course of a season, but never had a frog been found that could transform its skin so quickly, Guayasamin and four co-authors wrote in their article.

They clocked the tiny green-and-brown frog’s transformation at 330 seconds.

Photos of the experiment show the frog at zero seconds with rough skin covered in spiny protuberances, which gradually morphs into a smooth, slippery surface.

The trait may help the frog escape from danger, said Guayasamin, the director of the Center for Research on Biodiversity and Climate Change at Ecuador’s Universidad Tecnologica Indoamerica.

Though the discovery has just been announced, the species was in fact found back in 2009 by two US researchers, Tim and Katherine Krynak, who came across the peculiar little frog in the Las Gralarias nature reserve, about 35 kilometers (20 miles) west of the Ecuadoran capital Quito.

“The next day in the lab, they realized that the protuberances had disappeared, that the frog was completely smooth. Obviously they were surprised,” said Guayasamin, who co-wrote the paper with the Krynaks, US ecologist Carl Hutter and Spanish researcher Jaime Culebras.

But it took six years to carry out “solid” scientific work identifying the species, said Guayasamin, who is still working with colleagues from the United States, Brazil and Switzerland to understand how the frog’s skin works.

He said the frog is nocturnal, lives in trees and has several different calls — also an unusual trait for amphibians.

Seven have been captured so far, in Las Gralarias and another reserve called Los Cedros in the northern province of Imbabura. The two populations look alike but have slight genetic differences, Guayasamin said.

Around 15 previously undocumented amphibian species have been discovered in the past three decades in Ecuador, one of the world’s most biodiverse countries.