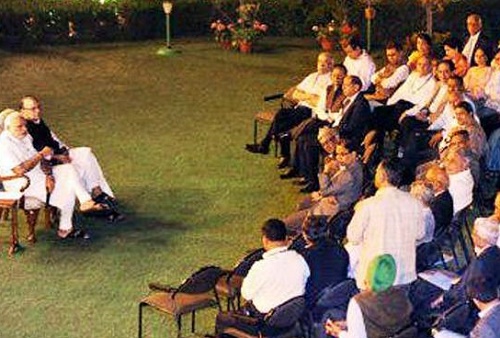 New Delhi:Â Prime Minister Narendra Modi on Wednesday hosted a ‘chai pe charcha’, his third such informal interaction with top bureaucrats as a stock-taking exercise on the first day of the new financial year.

He urged the officials to speed up decision-making and remove any communication gap among themselves as he promised to ensure that officers have the freedom and protection for objective and honest decision-making.Â

He made his views known during an informal interaction with all Secretaries to the government of India.Â

In the course of the interaction, Modi described the assembled officers as one team and appreciated the good work done by the team over the last ten months.Â

In particular, the Prime Minister mentioned the success of coal block auctions and the Pradhan Mantri Jan Dhan Yojana, a PMO statement said.Â

“The Prime Minister once again urged all Secretaries to consult each other regularly, to eliminate silos, if any, and speed up the process of decision-making,” the statement said.Â

He underlined that a “communication gap” in “this team was absolutely untenable”, it added.Â

Modi reiterated his view that officers in the government should have the freedom and protection for objective, honest decision-making and said efforts were being made to ensure this, the statement said.Â

Soon after taking over as Prime Minister on May 26 last year, Modi had met all the Secretaries on June 4 and told them to fearlessly take decisions and that he would back them.Â

He had also told them that he was always accessible to them in case they had any problems in discharge of duty.