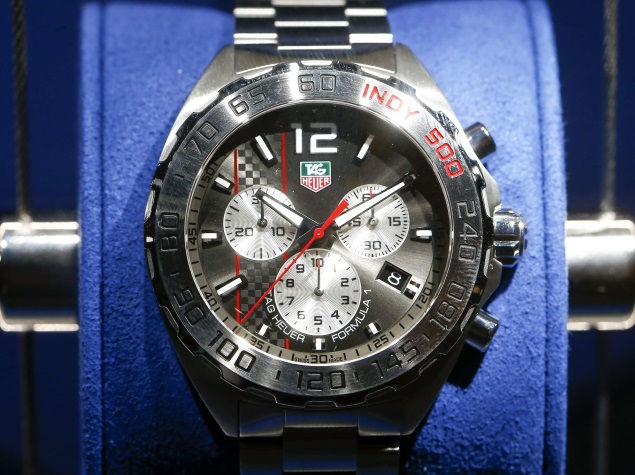 Tag Heuer plans to unveil a smartwatch on Thursday among a wave of partnerships expected at the world’s biggest watch fair this week as luxury watchmakers fight back against Apple.

The Swiss watch brand, the biggest at French luxury group LVMH, will announce it is teaming up with U.S. chip maker Intel Corp to create a digital version of one of its best-selling model, industry sources have said.

Tag Heuer is planning to launch next autumn a smartwatch version of its Carrera watch that will offer many of the same functions as the Apple Watch such as geolocation, distance walked and altitude.

The major difference is that the watch will be a digital replica of the original Tag Heuer black Carrera, known for its bulky, sporty allure, and will look like the original.

“People will have the impression that they are wearing a normal watch,” Tag Heuer Chief Executive Jean-Claude Biver told Reuters in an interview at Baselworld, the industry’s biggest fair where retailers place their orders for the year.

Biver agreed with Swatch Group Chief Executive Nick Hayek who said the smartwatch “would increase the cake” for the industry as a whole.

“Apple will get young people used to wearing a watch and later maybe they will want to buy themselves a real watch,” Biver said.

The jury is still out on whether Apple’s smartwatch will be a major success once it hits the stores next month but Swiss watch makers have been busy trying to come up with attractive alternatives ahead of time.

Many analysts predict Apple’s watch, to be priced from $349 to $17,000, will dent sales at several Swatch Group brands, such as Tissot and Omega. JPMorgan estimates 33 percent of Swatch Group’s profit is exposed to Apple’s watch threat.

Swatch Group has told analysts it will integrate near field communication (NFC) into several of its watch brands, first Swatch, then Tissot and Omega.

It said its competitive advantage would be longer battery life than Apple’s watch as its smartwatches, having more limited capabilities, would require less energy. Apple watches must be recharged every 18 hours, meaning they typically cannot be worn overnight.

Tissot, which has long been making watches with touch screens, on Wednesday unveiled its new connected T-Touch fitted watch with a solar battery.

Makers of traditional mechanic watches such as Hermes and family-owned Patek Philippe said there would always be demand for the real thing.

Their argument is that the technology of smartwatches such as that of Apple will be obsolete after a few years while luxury watches could last centuries. They also pointed out that Apple’s watch needed an iPhone to be in close proximity to function fully.

“When you are buy a Patek Philippe, you buy a timeless piece of art,” said Patek Philippe Chairman Thierry Stern. “It would be as if you told people to no longer buy paintings but TV screens projecting the image of a painting.”

Stern also said he believed many consumers would prefer wearing a traditional watch with a suit or a black tie, rather than a smartwatch.

Both Patek Philippe sand Hermes said they had no plans to market smartwatches.

“For the moment, Hermes is observing what is going on,” said Guillaume de Seynes, a managing director at Hermes. “We still do not know how the smartwatch market will evolve.”